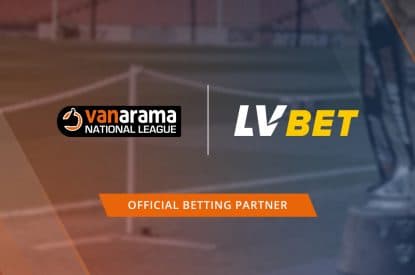 LV BET has been unveiled as the National League betting partner for the upcoming season and will be engaging with fans of all clubs, through ticket giveaways, shirt competitions and hospitality packages.

Kick-off in the 2019/20 National League season is fast approaching and it promises to be another hugely exciting campaign.

Adrian Sidowski, CEO of LV BET said: “We can’t wait for the National League season to kick-off and to be socially active with supporters of the competition’s clubs. We have some great initiatives to connect with the fans and to see more live matches on TV will showcase the National League in a great light”.

“This season is going to be as competitive as ever with AFC Fylde, Chesterfield and Notts County at the top of the betting. Wrexham, Barnet and Solihull Moors have all invested in their squads as well, so we expect the promotion race to be extremely close.”

With more live matches than ever being broadcast on BT Sport, LV BET will be present on match days with broadcast facing branding.

The betting brand will also be very active across social media, delivering great content for National League supporters and launching a performance of the month campaign. Follow @LVBET_com on Twitter and LVBETUK on Facebook for exclusive offers on National League.

This is not the first sponsorship activity in the United Kingdom; LV BET sponsors the PFC Victoria London, sponsored the German National Ice Hockey Team and Kölner Haie, a team from the Deutsche Eishockey League. In Poland, LV BET is the main sponsor of Wisla Krakow and Arka Gdynia; also, a previous sponsor of the European Volleyball Championship (Euro Volley Poland 2017). LV BET is constantly sponsoring sports teams because they believe through discipline and teamwork a lot can be accomplished; victory goes way beyond the pitch.