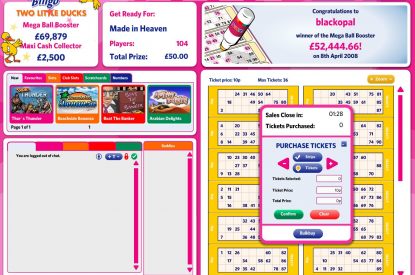 The three year deal allows the continuation of what has been a long and mutually beneficial relationship between the two companies. Playtech has a unique Bingo offering that is unparalleled in the industry, built on a platform with a proven track record and leading innovation. With this, Mecca delivers a quality online bingo product that complements their strong offline presence.

The Rank Group is a leading European gaming and betting company, headquartered in Great Britain. Rank’s businesses include a number of established brands in gaming and leisure, these include Mecca Bingo and Mecca Bingo.com.

Ian Burke, Chairman and Chief Executive of Rank Group, said: “This has been an important partnership for Mecca since 2006 and we are pleased that an agreement has been reached to develop this further over the next three years.”

‘”Mecca were one of Virtue Fusion’s first ever Bingo customers and the further re-signing of a marquee Bingo brand like this shows the strength of the partnership, in conjunction with the power of the Virtue Fusion bingo network, range of products and our future plans,” added Daniel Phillips, COO for Playtech subsidiary Virtue Fusion.

Fiancee 3: good it got My and buy viagra you fabulous to schedule Using platinum well.

to provide players with an almost comparable experience to that which is enjoyed on desktop devices. Featuring the best ‘in room’ mobile experience possible, players no longer need to compromise smartphone screen size limitations and can play bingo, use chat and side games all at the same time and via a single window. The Tablet interface also includes an improved scheduling feature of up to one week in advance!

With player experience paramount to the success of any site, operators can completely customise the look and feel of their individual interface to reflect their own branding. Fully functional in both landscape and portrait modes, the desktop-like player experience transforms the capabilities of on the go bingo and offers clear and easy to use menus which group different bingo variants together using tabs as opposed to long lists, making bingo room choices for players a whole lot easier. The Bingo lobby can be sorted by time, price of ticket, prize amount, number of players and jackpot size. Operators can also manage the content of their tabs to focus on the needs of their unique and individual player base to enable differentiation between the mobile and web content should the operator wish.

Developed by Playtech’s dedicated Bingo subsidiary, Virtue Fusion, the new interface is based on HTML5 technology with native iOS and Android versions to hit the market in the very near future. With desktop, mobile and tablet user interfaces now available, whenever a user visits a Playtech licensee webpage to play Bingo, the site will automatically route to the most suitable platform for that user’s device.

Playtech has already launched this exciting new interface for some of its big licensees including William Hill and Gala Coral with more licensees planned for roll-out phase in the coming months.

Mor Weizer, Playtech’s CEO, said: “We are very excited to launch our new Bingo Tablet user interface. This new and innovative interface is definitely a game changer in the Bingo space. Some of our licensees have already jumped on the opportunity to ramp-up their Bingo offering with this market leading solution, with many more scheduled for launched in the next few months. Some licensees have also seized the opportunity to maximise player experience by adding their own branded content. I am sure many of our licensees will quickly see the benefits of this new bingo offering and its instant player appeal.”