UK – PIMS-SCA to run further promos with The Empire 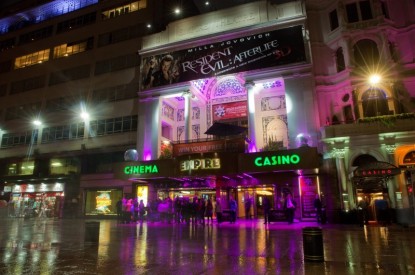 Specialists in promotional risk management, PIMS-SCA has announced its latest partnership with The Casino at The Empire on Leicester Square, working together on a chance to win £250,000 with a Royal Flush Money Bags game.

Having run a similar promotion in 2012, this sees PIMS-SCA and The Empire Casino working together once again; the promotion will run every Tuesday night for the next four weeks and two tombola style draws will take place at each event to decide on the contestants. Each contestant will then have the chance to win £250,000 by playing the Royal Flush Money Bags game devised, supplied and financially protected by PIMS-SCA.

The Empire Casino, part of London Clubs International (LCI), chose to work with PIMS-SCA again due to its extensive experience in prize promotions for the gaming industry; PIMS-SCA had previously run similar promotions with other LCI casinos, making it very simple and quick to integrate. The Empire wanted to turn around a quick campaign that offered maximum return and to provide an exciting live event to increase customer loyalty and mid-week casino visits.

Each game set consists of 20 security sealed envelopes (Money Bags), each one containing either the 10, Jack, Queen, King, or Ace for all four of the suits. The 20 Money Bags are then placed on a specially created Royal Flush game board and the contestant is instructed to go and select any 5 envelopes at random. The Poker hand they reveal determines what prize they will win, with every player guaranteed to get at least get one pair. The prize fund includes: £250,000 for a Royal Flush, £10,000 for Four of a Kind, £2,500 for a Full House and smaller wins such as £500 for One Pair.

PIMS-SCA devised and supplied the game mechanic and advised on the creation of the Royal Flush game board. Commenting on this Sales Director for PIMS-SCA, Matt Butcher said “It is great to be able to be involved with such an exciting project and to work with The Empire Casino again. In our experience these classic promotions are the perfect way to engage an audience and is also a great way to offer big prizes within set budget criteria. We look forward to continued work with The Empire Casino and London Clubs International in the future.”