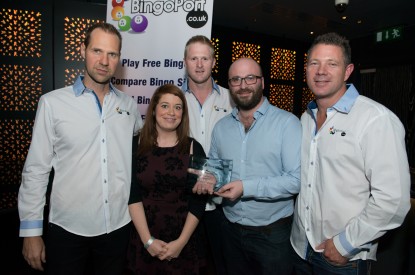 The Bingoport.co.uk Players’ Choice Awards are the most respected players’ choice awards in the online bingo industry, with the awards voted for by genuine online bingo players, including Bingoport’s impartial membership base.

With the industry’s key decision makers present, the eight award winners were revealed. The winner of the night’s premier award for the Best Overall Bingo Site, was Sun Bingo, who achieved the title for the first time, ahead of previous winners Foxy Bingo and Tombola.

Foxy Bingo was not without much deserved recognition however, receiving two awards on the night in the Best Mobile Bingo Product and Best Chat Host Team categories, an award highly regarded by the bingo playing community.

The award for the Best New Bingo Site of 2013 went to the interestingly named, Lucky Pants Bingo, who has established a significant following on the back of its catchy television advertising campaign. However, that was was not quite as impressive according to players, as Paddy Power Bingo’s Husband Removal Service ad, which won the Best Bingo TV Ad award in handsome fashion.

Andrew Housego, Head of Operations at Bingoport.co.uk, said: “We were thrilled with the success of the evening. The feedback we received from all in attendance was that this was the best in the six years we’ve been hosting the event. We extend our thanks to all bingo operators for their attendance and support of the awards and of course to the bingo playing community for casting their votes to determine the winners”.

With over 100,000 members, Bingoport.co.uk is the UK’s most awarded free bingo and bingo comparison site. Established in 2007, it has been successfully entertaining players around the country without ever accepting payment.