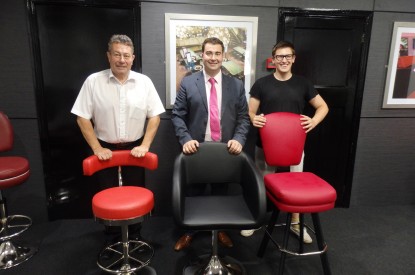 Two years shy of its 50th birthday, renowned chair manufacturer PST has embarked on a new chapter in its history with a name change and a move into table manufacturing.

A raft of table orders have already proven the casino sector is serious about the newly named PST Gaming Furniture with table orders flowing in from prestigious names such as The Hippodrome, Genting and Poker Stars. The Rainbow Casino in Aberdeen has just become the first casino though to order its entire range of traditional gaming furniture from the South Shields-based manufacturer, closely followed by the Time Out casino in Limerick.

Operations Director Gareth Treharne said: “It’s taken us five years of meticulous research and development to get to this stage. We’re delighted that the Rainbow Casino, operated by Double Diamond, has ordered its full range of tables from PST. Following on from us manufacturing 40 odd tables for the Poker Stars’ international tour as well as the poker tables in the Hippodrome and another well-known London casino, the Rainbow deal really is a landmark achievement for us. We’ve followed it up with an order for the entire range of tables, chairs and live gaming accessories at the Time Out casino in Limerick, which has included 15 tables for blackjack, roulette and poker. Alongside these deals, we’ve recently supplied all the poker tables as part of the Genting refurb in Reading as well as the punto banco tables for Napoleons in London, operated by A&S Leisure. York Place in Edinburgh has just received delivery of roulette and blackjack tables.”

Managing Director Steve Treharne said: “We changed our name and logo in January to better represent the products we manufacture and the sectors we service going forward. We have two markets; gaming and betting and the leisure sector. Last year, I’d say the Licensed Betting Office sector provided us with the most business with some notable deals with BetFred, Coral, Boyle Sports and Jennings. The casino sector really comes alive with refurbs or new openings. I’m delighted to say we are currently working on seating for Genting’s eagerly awaited ‘large’ casino in Solihull; Resorts World Birmingham, which needs 500 chairs spread over three floors of gaming and entertainment. We’ve worked with all the major groups over the last 12 months though including A&S Leisure, Aspers, Double Diamond, Hippodrome, London Clubs International and Grosvenor.”

The company has also worked with some esteemed names in the leisure sector including McDonalds, Revolution Bar, Beer Kellar and Frankie and Bennies in various parts of the UK as well as St Georges Hill Tennis Club in South London. It also recently supplied the seating for Casino Gran Via in Madrid, where the property and the chairs were designed by Paul Steelman.

Following the recession in 2008, the company’s move into markets such as Holland, Belgium, Germany and France, the latter of which was through a distribution deal with Caro, saw the company’s export business account for 70 per cent of its sales. Despite business not dropping off on foreign soils, export now only accounts for 35 per cent of the business.

“This is all down to the surge in popularity of the Fixed Odds Betting Terminals,” Stephen Treharne explained.

Everything about the PST setup is geared towards efficiency. “We’re based in the former ‘shipyard county’ where there is an abundance of extremely skilled workers,” Stephen Treharne explained. “Every material we use is sourced ourselves and every procedure in the entire manufacturing process from cutting, shaping, bending, welding, chroming and upholstery takes place in-house. We’re in control of everything so can ensure everything is done to the highest quality. It also means we’re not limited to anything when it comes to the design of bespoke furniture. We can for example provide bases of any size for our stool range. Our lead time is just three weeks for bespoke furniture.”

The PST attention to detail was also exemplified with a recent order from BetFred who wanted its seating options matched to the exact colour of its ‘BetFred red.’

“We matched the exact composition of the ‘BetFred red’ which has led to a lot of repeat business with the betting company,” Gareth Treharne explained.