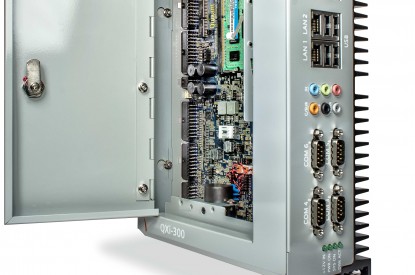 Quixant will soon be launching its new all-in-one gaming platform, the QXi-300, which is an evolution of the best-selling QXi-200.

This new addition to Quixant’s platform range is based on the ground breaking technology of the AMD Embedded G-Series SoC with integrated AMD Radeon HD8000 Series graphics and also includes Quixant’s latest PCI Express based gaming logic and non-volatile memory. It is available -in Dual-Core or Quad-Core configurations clocked at up to 2.0GHz

The launch of the QXi-300 brings a new level of performance at the price point and is capable of running two independent HD screens from a single DisplayPort 1.2 interface through the use of Multi-Stream Transport (MST) technology. Housed in a compact, fan-less case, the QXi-300 is form factor compatible mechanically with the QXi-200 and QXi-4000.

Quixant’s full suite of software, which is available for both Windows and Linux in 32 and 64 bit variants, ensures a rapid and straightforward migration between different platforms in Quixant’s range and removes the heavy development required to write games for Quixant’s gaming platforms.

Quixant will also be showcasing their flagship QX-40 platform, and the mid-range QXi-4000. Both gaming platforms have already gained significant market traction since their launch.

All Quixant’s gaming platforms have been designed specifically to drive pay-to-play gaming machines and meet the requirements of all major global gaming jurisdictions.