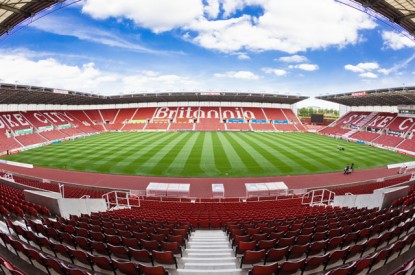 bet365 has secured a deal to rename the Britannia Stadium , home of the English Premier League’s Stoke City as the bet365 Stadium from the start of the 2016/17 Premier League season.

The betting company has entered into an initial six-year stadium naming rights agreement with the club’s owners and has also extended its shirt sponsorship of the Potters for a further three years.
bet365 has its corporate headquarters in Stoke-on-Trent and is the city’s largest private sector employer with a workforce approaching 3,000.

Stoke City Chief Executive Tony Scholes said: “The Premier League is constantly evolving and to ensure that Stoke City remain as competitive as possible it’s important we explore as many ways as possible of generating revenue. As supporters are no doubt aware the Britannia brand no longer exists and it was important that we attracted a new stadium naming rights partner. The Premier League is watched around the world and bet365 are a truly global company. We are delighted that we have been able to reach an agreement with them over the stadium naming rights for an initial six year period, along with the extension of their shirt sponsorship agreement.

He added: “bet365 are taking over from Britannia and I would like to take this opportunity to thank Britannia and the Co-operative Bank for their tremendous support over the past 19 years. We also felt the time was right to redevelop the corner of the ground between the DPD and Marston’s Pedigree Stands. Planning permission has been in place for some time but it was important we carried out the work when we felt the Club was ready for an increase in seat capacity.”

John Coates, Joint Group Chief Executive of bet365 and Vice-Chairman of Stoke City, said: “bet365 have been pleased with the global brand exposure from our sports sponsorship agreement and we are always looking at ways to increase this. Entering into a stadium naming rights agreement with Stoke City seemed a natural fit, especially as the city of Stoke-on-Trent is home to bet365’s corporate headquarters. We are delighted about the plans to fill in the corner of the stadium and are looking forward to what we hope will be a successful future for both the Club and bet365 with both organisations continuing to work closely together.”