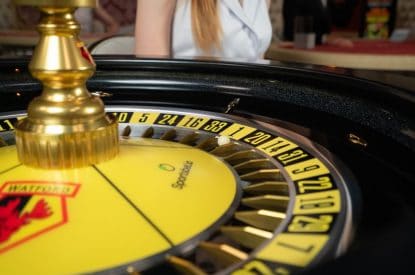 Featuring the distinctive yellow and black colours associated with ‘The Hornets’ team, the unique roulette wheel endorses the partnership between the two organisations’, whilst adding an element of fun to the traditional game.

Justin Le Brocque, Head of Marketing, Sportsbet.io, said: “To celebrate our sponsorship with English Premiere League football club Watford, we wanted to offer something unique to our players. TCS John Huxley is recognised by the industry as leaders in their field, so a custom designed roulette wheel in the hornets’ colours for our Bombay Club was a natural pick – and very well received by our players.”

Amy O’Connor, Partnership Manager Watford FC, added: “When we were offered the opportunity to have our branding on the table we jumped at the opportunity. This has never been done before and also further strengthened the holistic partnership we have with Sportsbet.io. The wheel has been very well received, and new Watford fans may have now been created.”