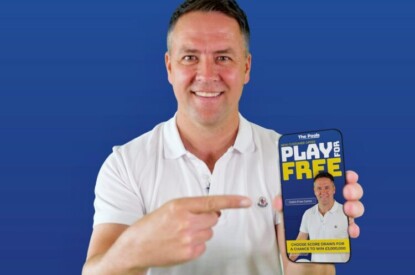 The Pools has launched a major promotion for affiliates to use to drive new player acquisition as part of celebrations for the gambling brand’s centenary season.

The Pools is preparing to celebrate its 100th season, billed as ‘it’s best season ever’ in the top flight of football betting, by giving away 10,000 free games.

Players can test their knowledge of team form and have the chance to join the elite club of Pools millionaires – for free!

If they use their skill and judgement to correctly predict score draws, they could walk away with one of The Football Pools’ big cash prizes – including a top weekly jackpot of £3million.

With the 2022/23 season marking the start of a historic century, The Football Pools has made a new signing to help kick off its celebrations.

Affiliates will be able to use a selection of special assets to promote the campaign and push new players to The Pools.

The record-breaking striker turned pundit knows all about the power of 10 – he wore the lucky number throughout his career at Anfield, netting 158 goals for the Reds, and when he made a decade of goalscoring appearances for England.

He’s also a keen supporter of The Football Pools, as one of three new members on the Pools Panel.

Michael said he was looking forward to helping fans use their passion for the game to become Pools prize winners.

“The Football Pools is an institution in this country that generations have grown up with,” Owen said.

“It’s an incredible achievement to be reaching its 100th season and by giving away these 10,000 games, hopefully it will be an opportunity for lots of people to play for free and make it a really memorable one. We might even get players who win life-changing prizes which would be amazing.”

Derek Lloyd, CEO of The Football Pools & The Pools, said the 10,000 free game giveaway was a way to share the anniversary celebrations with players who’ve been loyal over the years, and introduce new ones to a British tradition.

“We know how much people love the Pools, matchdays wouldn’t be the same without it for lots of players and families, so as we go into what is a landmark year for our company we want them to have this game on us – and we hope to be handing over some of our famous Pools cheques to them soon!”

Andrea Foley, Partnership Marketing Manager at The Pools, added: “We know that promotions are a part of new player sign-ups, and we want our affiliate partners to be able to use the offers responsibly to engage their audiences and introduce them to The Pools.

“This is one of our biggest promotions yet, with 10,000 free games available and a prize pot to play for including the £3m jackpot. This, combined with Michael Owen fronting the campaign, should really help affiliates generate significant interest around The Pools and the start of the new football season.”