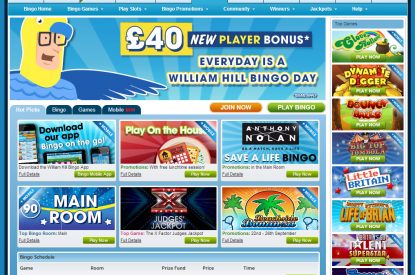 William Hill has signed a new, long-term, multi-year extension to its existing bingo contract with Playtech.

The well-established Playtech licensee has put pen to paper on an extension to its current bingo deal further enhancing the long-standing relationship both companies have had for many years.

The award-winning Playtech Bingo Network offers the largest liquidity pool of any regulated bingo product on the market with more than 70,000 players and up to 20,000 concurrent users across William Hill Bingo and Playtech’s other network bingo licensees. It also offers millions in jackpot prizes with the network due to fund around £5m in guaranteed jackpots in the fourth quarter of this year and into Q1 2015.

Licensees have access to the most cutting-edge mobile and tablet product on the market; the only true multi-channel, on the go, 24/7 range of products where players can, for example, begin playing in a bingo club continue the experience on their travels and switch to their laptops, mobiles and/or tablets devices when at home. The Playtech Bingo offering also comes complete with the best performing cross-channel slot games with retail favourites now mirrored online and on mobile.

The Playtech Bingo team have decades of both retail and online bingo experience offering licensees the choice of either running the operation themselves or managing it as a service.

James Curwen, Director of Gaming, William Hill, said: “We’re very pleased to have renewed our bingo agreement with Playtech and the highly experienced team there. We look forward to working together to grow the business even further.”

Dan Phillips, COO, Playtech Bingo, said: “We’re delighted that William Hill, one of Playtech’s most established partners, has agreed to renew its contract. This is a real endorsement of our market-leading, multi-channel bingo product and the industry’s biggest and best performing bingo network.”