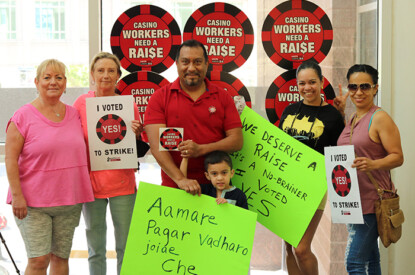 The union’s worker negotiating committee at the MGM-owned Borgata and Caesars Entertainment-owned Caesars, Harrah’s and Tropicana casinos have approved the agreements and will set a date for a ratification vote from the entire membership soon. A strike deadline remains in effect for Hard Rock casino for July 3 and strike pay signup will begin tomorrow at 8am on the Boardwalk in front of the property.

Members from Caesars, Tropicana, Harrah’s, Borgata, and Hard Rock casinos voted 96% “yes” to authorize a strike, if called by the worker negotiating committee. The negotiating committee then set a strike deadline of July 1 if an agreement is not reached with Caesars, Harrah’s, Tropicana, and Borgata, and July 3 for Hard Rock. Workers flooded the Convention Center today between 8am-7pm to cast their ballots with the results revealed at a press conference held shortly after the polls closed and ballots were counted.

Over the years, casino workers have sacrificed wage increases for the health of the industry. Workers have persevered though casino closures, Hurricane Sandy, and a global pandemic. Now, they’re falling behind. As industry’s profits and gaming revenues surpass pre- pandemic levels, wages for Atlantic City’s casino workers have not kept pace.

After contracts expired on May 31, workers picketed on the Boardwalk to demand the raises they urgently need and deserve. The vote puts the decision of whether and when to strike in the hands of the worker negotiating committee, which is made up of hundreds of workers from all nine casinos.

“We can’t wait and hope that the companies will do the right thing,” said Nikki Schwendeman, a Borgata Food Server who’s been in the industry for 38 years. “They need to know that we’re serious about winning the raises we deserve. That’s why I joined thousands of other members and voted yes to authorize a strike today.”