US – AGEM Index falls in May 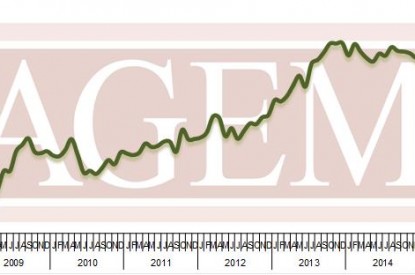 The composite index dipped to 196.98 in the latest period, which represents a decline of 3.70 points, representing a drop of 1.8 per cent from the prior period and the second month-to-month decline this year. Compared to a year ago, the AGEM Index is up 18.05 points or 10.1 per cent. The index previously reported year-over-year gains for three consecutive months.

During the month, a number of gaming equipment manufacturers reported their earnings for the three months ending March 2015. While results by company have been mixed, selected results are highlighted below.

International Game Technology PLC (IGT) reported separate results for GTECH S.p.A. and International Game Technology, since their merger was not completed until after the end of the reporting period. During its first quarter of 2015, GTECH S.p.A. reported net revenues of €807.7m, which represents an increase of 3.4 per cent compared to the prior year. The gain in net revenues was primarily attributable to a 3.6-percent increase in service revenues to €755.4m, which was driven by lottery growth in Italy and the Americas. Adjusted EBITDA was €295.6m, down modestly from €296m reported a year ago.

The Americas segment reported the greatest annual increase in net revenues during the period, rising 22.8 per cent to €300m due to gains in service revenues. The International segment followed with net revenues of €77.1m, up two per cent annually. Meanwhile, net revenues in Italy reported a decline of 6.7 per cent year-over-year, falling to €430.4m due mainly to higher sports betting payout.
IGT reported net revenues of $399.4m during its second fiscal quarter of 2015, which represents a decline of 22.1 per cent compared to the prior year period. Gaming operations revenues fell 17.2 per cent to $190.7m due to an 18.4 per cent decline in the installed base to 43,600 units. Product sales revenues fell 43.4 per cent annually to $114.6m, primarily due to a decline in new unit sales and non-machine sales. In addition, the average machine selling price fell 18.4 percent to $12,000.

IGT recently announced plans to sell its 610,000-square-foot campus in Las Vegas, Nevada located on Buffalo Drive near the 215 Beltway. The company reportedly plans to keep corporate headquarters in Las Vegas, but is looking for smaller locations to fit its needs.

Galaxy Gaming (GLXZ) reported revenues of $2.6m in its first quarter of 2015, up 14.1 per cent from $2.3m one year ago. The latest gain is attributable to increased placement of premium games as well as expansion into new markets. Meanwhile, adjusted EBITDA reported an annual decline of 15.4 per cent to $828,700 during the period, which the company sourced to a 37 per cent rise in selling, general and administrative expenses from a year ago.

Intralot S.A. (INLOT) reported a 12 per cent gain in net revenues in its first quarter of 2015, rising from €445.7m in 2014 to €499.4m in the latest period. During the quarter, the company renewed its contracts with the Netherlands, Morocco and Azerbaijan and continued to streamline its operations.