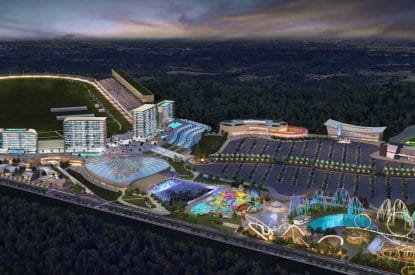 With gambling not currently allowed in the Peach state, also known as the Bible belt, Senator Brandon Beach has suggested a referendum should be held on the matter.

Atlanta Motor Speedway President and General Manager Ed Clark said: “We want to create something that would bring people of all ages for multi-night stays. It’s not all about gaming. It’s about entertainment. We have diversified events including airshows, the Georgia State Fair, Imagine Festival, fun runs and color runs. We have all kinds of activities. We are more of an events facility rather than motor facility. If gaming is allowed in the state, we will sit down and plan it with our partner. We want to truly create it as a destination. It would create roughly 5,000 jobs. We hope they will put it on the 2020 election ballot and let voters choose whether they would like to allow gambling.”

In addition to the existing race track, the project would include a 3-level gold driving range, an indoor/outdoor waterpark, a 330,00-square-foot theme park, 10 theater cinema complex, a family entertainment center with an e-sports arena, a night club, 11,000 seats for concerts, 10 restaurants, and a 300,000-square-foot premium outlet mall. The casino would cover 85,000 square foot with 75,000-square-feet of convention space, and a 700 room hotel.

Senator Brandon Beach said: “I have never seen so much energy and so much enthusiasm about this issue. I think there is a momentum to ‘let’s go ahead and let the voters decide.”

For casino gaming to be approved in Georgia, two-thirds of the House and Senate chambers would need to vote on holding a ballot referendum before a majority of voters could amend the state constitution.