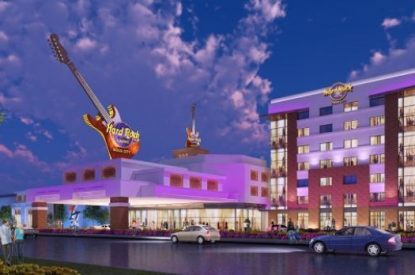 Hard Rock Hotel & Casino Sioux City has now confirmed it will open to the public on August 1, 2014, with more than 830 slot machines in its state-of-the-art gaming facility currently under construction in the historical Battery Building located in downtown Sioux City.

“We are excited to announce that on August 1st, the public will be able to enjoy this facility and all it has to offer,” said Todd Moyer, Hard Rock Hotel & Casino Sioux City general manager. “This project, that will bring more than 500 jobs to Sioux City, offers a bright future for the area that we call home.”

“This venue is so much more than a casino. It will be an entertainment destination unlike any other,” said SCE Partners, LLC President and CEO, Bill Warner.
The Hard Rock Hotel & Casino Sioux City has partnered with Missouri River Historical District, Inc. (MRHD). MRHD is a non-profit organization based in Woodbury County, Iowa that distributes millions of dollars to area organisations.