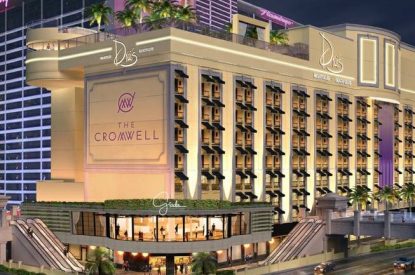 The Cromwell’s 3,716 sq. m. casino floor has opened with 434 slot machines and 66 table games. Some of the hotel’s 188 hotel rooms have been opened to invited guest although it won’t start taking bookings until May 21.

In March last year, Caesars announced that the Cromwell would benefit from a partnership with New York-based Gansevoort Hotels chain of boutique luxury hotels however by October, the agreement with Gansevoort was severed after Massachusetts gambling regulators said Caesars shouldn’t be allowed a license for a casino at the Suffolk Downs racetrack, due to alleged connections between Gansevoort investor Arik Kislin and the Russian mafia.

The 12-story resort is a boutique hotel, dwarfed on either side by the Flamingo, Caesars Palace and the Bellagio. It will boast a rooftop pool, Drai’s day and nightclubs, and celebrity chef Giada De Laurentiis’ first restaurant, Giada’s.
“The Cromwell will bring an exclusive experience to the Las Vegas Strip as a luxury lifestyle boutique hotel focusing on hospitality, amenities and personalised service,” said Karie Hall, general manager of The Cromwell. “Our partners Giada De Laurentiis and Victor Drai will inspire 360-degree day life, nightlife and dining experiences that you won’t find anywhere else in Las Vegas.”