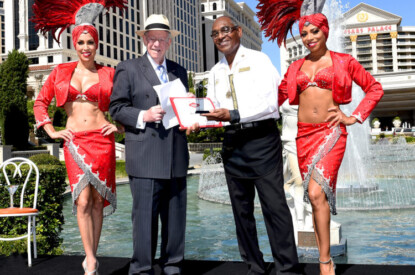 In celebration of his 55+ years of service at the resort, Figgins received a grand send-off fit for a Caesar. At the conclusion of his final shift, Caesars Palace team members and Caesars Entertainment leadership sent Figgins on his way through the resort’s main entrance with good wishes and cheers. He left work for the last time with a special limo ride to his home.

In honor of his retirement, Regional President of Caesars Entertainment Sean McBurney gifted Figgins a commemorative plaque and a string of crystals from the chandelier in the original casino dome at Caesars Palace. The iconic gaming area where Figgins worked for the past five decades recently experienced an upgrade with a new chandelier, columns and carpeting as part of a multimillion-dollar renovation of the resort’s main entrance.

Hired on April 27, 1967, Figgins has held positions in five different departments at Caesars Palace. He began as a casino porter, assisting with maintaining cleanliness throughout the casino floor. Then, Figgins became a convention porter and helped set up a variety of events. Later, he worked as a dishwasher at the original Bacchanal restaurant kitchen and a busboy in the Circus Maximus showroom. Since 1971, Figgins served as a blackjack dealer in the original Palace Casino dome. Some of his most memorable moments include dealing to and meeting celebrities including Frank Sinatra, Sammy Davis Jr., Diana Ross, Henry Belafonte and Joe Louis. Figgins said he is going to miss working at Caesars Palace, which has been his home away from home.

Figgins also met his wife while working at Caesars Palace in the early 1970s. She retired after working at the resort for 38 years as a PDX operator and a table games dealer. They are happily married and have three daughters.