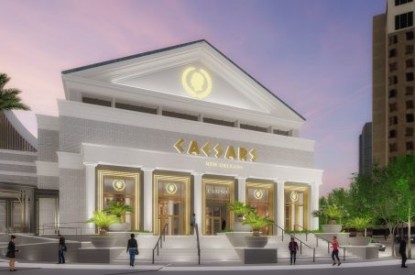 Caesars Entertainment, parent company of Harrah’s New Orleans, has shared plans to transform the property into Caesars New Orleans as part of a $325m renovation and construction project that will significantly enhance the property, set to be completed by 2024.

The plans, presented before the New Orleans Building Corporation, detail a large-scale renovation of Harrah’s, the only land-based casino in New Orleans. Embracing the iconic Caesars brand, the project will create a new flagship resort, Caesars New Orleans, featuring the elegance and indulgence that has become Caesars’ hallmark only steps from the famed French Quarter.

Preliminary plans include an all-new 340 room hotel tower above the existing casino valet porte cochère, a new culinary and hospitality offerings within the casino, additional development of the unoccupied area on the second floor of the casino, alongside full exterior and interior architectural and design enhancements

“We are excited to introduce Caesars New Orleans to the city,” said Tom Reeg, CEO of Caesars Entertainment. “As the only land-based gaming operator in the city, we take great pride in our 20-year history in New Orleans, and this reinvestment is a testament to our continued commitment.”

“We will continue to move this city forward and fuel our economic recovery, moving important projects that put people to work and entertain residents and visitors alike,” explained LaToya Cantrell, Mayor of New Orleans. “We are excited that this expansion will mean hundreds of construction jobs during the project and hundreds more in sustainable and new jobs post-construction. The addition of Caesars New Orleans will strengthen our city’s position as the top cultural and entertainment destination city in the nation.”

“As a native of New Orleans, I am so proud that we are working with local architects and designers to help enhance an already incredible destination,” added Samir Mowad, General Manager of Harrah’s New Orleans. “What was shared today is only the beginning of a transformation that will bring new energy, excitement, and fun to New Orleans.”