US – Caesars to rebrand Imperial Palace as The Quad 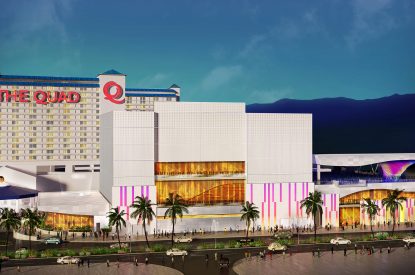 Although 2012 will go down as one of the few years that no new casinos have opened on the Las Vegas Strip, Imperial Palace is to lose its Far Eastern theme and be converted into a completely new property.

As part of its specular plans for The Linq, Caesars Entertainment has revealed plans to re-name the company’s center-Strip resort currently known as Imperial Palace to The Quad Resort & Casino.

Customers will start to see the brand transformation as early as November, but the official renovations will not be completed by December 21, 2012 with plans scheduled for finish by late 2013.

Interior and exterior renovations to the property are already under way. The renovations are scheduled to be completed in phases and will bring improvements to the exterior façade, porte cochere, front desk, bell desk, hotel lobby, casino floor, retail promenade and dining levels.

Rick Mazer, the resort’s President, said: “As we renovate and modernize the property, it was only appropriate that we also update the name. This property has always been known as a hub of social activity, where anyone can come relax and have a good time. As we update our offerings we want to further enhance that feeling of fun and connectivity. We think the name, The Quad, really embodies those sentiments.”

In addition to revealing plans for renovation, the resort is also unveiling a new brand look and feel to accompany the name. With its central location on the Las Vegas Strip, The Quad is literally in the middle of the action and a hub of activity for guests who share an enthusiasm for the eclectic. The Quad logo and creative were developed to evoke a sense of the unexpected with a playful and whimsical touch. As one of the quirkier letters of the alphabet, the “Q” becomes a distinctive brand icon and is a perfect starting point for the symbol within The Quad logo.

“Historically, this resort has had a very lively, welcoming appeal and we want to continue to build upon those qualities,” said Tariq Shaukat, chief marketing officer for Caesars Entertainment. “The Quad will be a social and spirited environment where our guests, dressed up or dressed down, will find what they need.”

The casino floor will expand an additional 15,000 sq. ft. engulfing the former Imperial Palace porte cochere and a nightclub and gift shop. The first phase of casino renovations will include 35,000sq ft, including the expansion, and is scheduled for completion in the spring of 2013. The second phase will include an additional 30,000 sq. ft of gaming space with a centralised promenade bar featuring state-of-the-art integrated audio-visual technology. This phase is scheduled for completion in late 2013.

While the original resort’s main entrance was Strip-facing, the main entrance and porte cochere to The Quad will be located on the north side of the building with access via Koval Road or the Harrah’s tunnel off Las Vegas Blvd. A pedestrian walkway, offering a safe pathway for guests on foot, will make its way from the adjacent Harrah’s Carnaval Court through to the south side of The Quad into The Linq, Caesars’ $550m retail, dining and entertainment district slated for opening late next year. Plans also include a dual-sided lobby bar, Starbucks, a retail promenade and a series of restaurants and eateries. Completion of the casino, lobby bar and front façade is expected by the end of 2013.