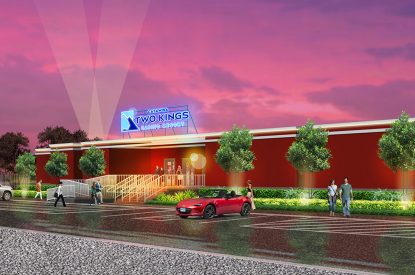 The Catawba Nation has announced it will fast-track the opening of the Catawba Two Kings Casino Resort project in Kings Mountain, North Carolina, by opening a “pre-launch”
facility this summer with 500 slot machines.

The pre-launch facility, which will be constructed using prefabricated modular structures, will provide an initial opportunity for patrons to game with limited food & beverage and other guest amenities.

“With the completion of our compact with the State of North Carolina, the Catawba Nation is eager to open the casino as quickly as possible to begin bringing economic benefits and jobs to the state and region,” Catawba Chief Bill Harris said. “We’re working with Delaware North, our consultant on the Catawba Two Kings Casino Resort project, as well as our developer, Skyboat Gaming, to make that happen by opening what we are calling a ‘pre-launch’ facility this summer.”

An introductory phase of the full casino is still planned and will feature an additional 1,300 slot machines. It will be a permanent structure that will become part of the full casino. Its construction is expected to take about a year.

“It makes sense to have the temporary pre-launch facility to start, and it will continue to operate during the construction of the introductory phase and possibly subsequent phases,” said Brian Hansberry, president of Delaware North’s gaming business. “It gives us a place to teach incoming staff and accommodates people in the region who are anxious to start gaming this summer.”

The 17-acre casino site off Dixon School Road in Kings Mountain, Cleveland County, is near Interstate 85 and about 35 miles west of Charlotte. The total $273 million casino resort project is expected to create 2,600 permanent jobs at full buildout and thousands of construction jobs in the region.

“This project will prove to be a long-lasting and sustainable economic engine for the residents of Cleveland County, we are excited about the expedited timeline” said Cleveland County Commissioner Johnny Hutchins.

“Chief Harris and the members of The Catawba Indian Nation are great partners. Our team looks forward to continuing to work side by side as the project develops” said Cleveland County Manager Brian Epley.

The Catawba Nation and the State of North Carolina in January signed a compact that allows the state to share in revenues generated by the new casino, which will be operated by the Catawba. In March 2020, the US Department of the Interior, following a thorough, years-long review, took the 17 acres of land into trust for the Catawba Nation. The action recognized the Catawba Nation’s historical and ancestral ties to its aboriginal lands throughout North Carolina, as evidenced by names such as Catawba County and Catawba College, as well as in the six counties, including Cleveland County, specifically identified by Congress as part of the Catawba’s service area. The state compact acknowledges this connection to North Carolina as well.

In addition to creating revenue for the State of North Carolina, the casino will help support an education fund that will benefit environmental conservation, provide educational support for members of federal and state-recognised tribes, support local communities on economic development initiatives and foster employment opportunities on or near Catawba lands.