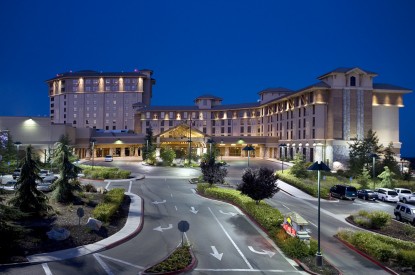 The National Indian Gaming Commission has issued an order closing the Chukchansi Gold Casino as of October 27, 2014 because of failures to submit audits and financial statements by the past Tribal Councils and Tribal Gaming Commissions headed by former Tribal leaders Reggie Lewis, Nancy Ayala and Chance Alberta.

Lewis, Ayala and Alberta led Councils that should have submitted audits and financial statements for both Fiscal Year 2012 and Fiscal Year 2013, according to the October 7th temporary closure order issued by NIGC Acting Chairman Jonodev O. Chaudhuri.

In addition to the casino closure, which is set to begin on the morning of October 27th, the NIGC order also states the Tribe will face fines of up to $100,000 per day because of the Lewis/Ayala failures to submit the casino financials.

The FY 2012 financial documents are currently more than 16 months past due, according to the NIGC closure order. The FY2013 audit and financial statements were due to the NIGC on April 30, 2014.

“This is disgraceful,” said Tex McDonald, chairman of the on-rancheria Tribal Council, which controls the Tribe’s government headquarters while the Lewis/Ayala/Alberta group took over the Chukchansi Gold property with a forceful occupation weeks ago. “Reggie Lewis, Nancy Ayala and their puppet Tribal Gaming Commission headed by Dyann Eckstein owe our people an explanation – on top of the millions of dollars they have illegally seized and owe to our Tribe. This is a matter of simple accounting and obedience to the law. How can they possibly have let more than 1,000 jobs and millions in revenue be put at risk by yet another failure to obey the law?”

Monica Davis, the Tribe’s Vice Chair, suggested that the Lewis/Ayala squatter group must have something to hide. “What else explains not filing these audits?” said Davis. “Our Council has been pushing to be completely transparent since the day we took office. YetReggie Lewis, Nancy Ayala, Chance Alberta, Dyann Eckstein and their puppet gaming commissioners have fought us at every turn. Where are the financial reports? Where are the audits? If they have nothing to hide, they need to produce these documents today – to the NIGC and to every member of our Tribe.”

The NIGC order provides for the possibility of expedited review. The On-Rancheria Tribal Council is working with its legal team to examine the Tribe’s options, said McDonald.

Said the Chairman: “We will do whatever we can to keep our casino open, because our Tribe’s economic present and our future depends on that revenue. While Lewis, Ayala and their group operates out of self-interest, we will continue to work for all 900 members of our Tribe, not just a few squatters holed up in an 11th floor high roller’s suite.”