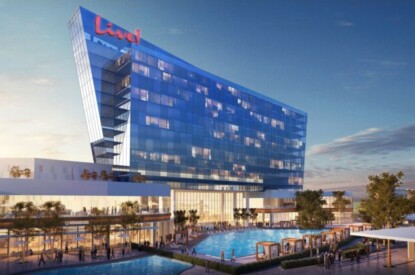 The Cordish Companies unveiled details for a $1.4bn transformative mixed-use development in Petersburg, VA. Live! Gaming & Entertainment District will set a new standard for development in the Commonwealth, creating a world-class entertainment destination and mixed-use project with gaming that will generate billions of dollars in economic benefits and spinoff  development, create thousands of new jobs and benefits to the local community, and become a major new tourist destination for the City.

Ideally located at the intersection of Wagner Road and Interstate I-95, the Live! Gaming & Entertainment District will offer easy access on and off the east coast’s major north-south interstate.

The world-class casino resort destination will feature more than 670,000 square feet of first-class gaming, hotel, dining and entertainment space with over 2,000 slots and electronic table games and 60 live action table games including poker and a sportsbook.

“The details unveiled today show what the City’s vision is for this type of project and why we wanted to work with Cordish as the developer,” said Petersburg Mayor Sam Parham. “An important part of our selection process was to identify a development partner with a proven track record in developing and operating mixed-use and casino properties, a long history of revitalizing cities across the country, and strong community engagement practices. Cordish is the only company, of the many we consulted with, that showed Petersburg a plan that goes beyond a casino and gives us a path to revitalize our city. We are confident that we have the ideal partner in The Cordish Companies to bring our vision to fruition.”

Cordish is one of the largest, most respected developer-operators of upscale mixed-use, entertainment and casino resort destinations in the United States. Its Live! brand is one of the most recognized and established entertainment and casino brands in the country. In gaming, The Cordish Companies has developed the most successful casino entertainment resorts in the U.S. including the Hard Rock Hotel & Casino Hollywood, FL; the Hard Rock Hotel & Casino Tampa, FL; Live! Casino & Hotel Maryland; Live! Casino & Hotel Philadelphia; and Live! Casino Pittsburgh. The Cordish Companies has been awarded an unprecedented seven Urban Land Institute Awards for Excellence in recognition of its urban revitalization accomplishments, more than any other developer in the world.

“The Cordish Companies is pleased to unveil details today for this major transformative development,” said Zed Smith, Chief Operating Officer of The Cordish Companies. “Live! Gaming & Entertainment District will be a catalyst for change and significant urban development, will transform the City by creating a thriving entertainment and hospitality attraction for the entire Region, and provide first-class amenities for the local community while generating spin-off economic development, creating thousands of new jobs for area residents, and substantial opportunities for local, minority, women-owned, and veteran-owned businesses. We look forward to continuing our work with the City to bring their vision to life.”