US – Crystal Lagoons to make Paradise Park a reality 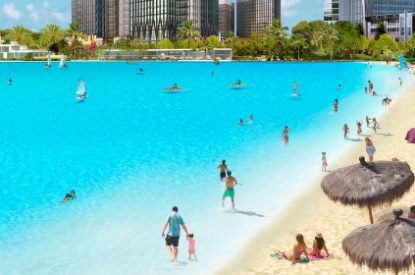 Crystal Lagoons has been named as the company to make Steve Wynn’s Paradise Park dream a reality, building a large crystalline lagoon to the Strip.

Just one one year after its arrival in the US, Crystal Lagoons has already signed 11 projects and it is evaluating another 44 projects in different US States, with an estimated total investment of US$ 53.4bn.

Crystal Lagoons’ Las Vegas project involves a total investment of US$4bn and it has a particular feature: It will be located at the land site of the only golf course in downtown. The site land will be reconverted into a 12.1-hectare crystalline lagoon, which will become one of the company’s milestones in the US.

When Wynn announced the development of a crystalline Lagoon within the project, on April 6, Wynn Resorts’ stocks rose about 12 per cent at the Nasdaq, increasing the firm’s value in US$ 1.05bn.
With a total area of 12.1 hectares, it will be the company’s largest crystalline lagoon in the US. It will boast a state-of-the-art design with a central island, gondolas, daily firework shows and live water sports events, hotels, a convention center, shopping and a wide gastronomical axis that will surround the lagoon.

Uri Man, CEO of Crystal Lagoons in the USA, said: “The opportunities this alliance represents are huge, given that Steve Wynn is currently involved in the most important resort projects in Las Vegas, Macau and the world. His formula has been to conceive a city especially devoted to entertainment, like Disney World, but for adults from all over the world, integrating luxurious hotels, casinos, retail stores, and world class theatres. Crystal Lagoons’ project in Las Vegas will make the company’s founder dream come true. At his very beginnings, Fernando Fischmann dreamt about bringing large bodies of crystalline water to the world’s entertainment and luxury capitals, such as Dubai and Las Vegas.”