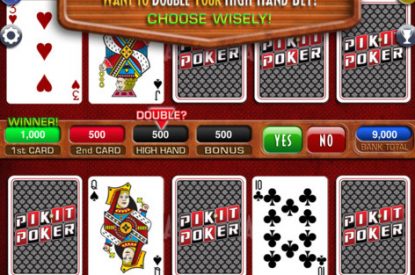 DigiDeal is taking its skills as an electronic, table manufacturer into the world of apps with a poker variant  now available for downloaded from both the iTunes App Store and the Google Play/Android Market.

Before playing against the dealer, players get to use their ESPP (Extra Sensory Picking Perception) to choose which two cards to reveal and a chance to win big with each pick. Other exciting features which make this game so addictive are multiple awards, achievement levels, and if the players log into Facebook their friends’ profile photo will appear on the card backs.

Pocket Pickit Poker is the mobile version of DigiDeal’s popular electronic table game Pikit Poker available on their DTS-C and V platforms approved for installation in casinos around the world.

Don Evans, Senior VP of Engineering at DigiDeal Corporation, said: “We didn’t just want to create another mobile poker game. We wanted a unique card game with poker elements and something the consumer hasn’t seen before.”

In the next few months DigiDeal’s game development teams will be releasing a new Pocket Pickit Poker update based on users’ feedback with new fun elements as well as a version without advertisements. Other exciting DigiDeal mobile game themes are in development and are scheduled for release in the coming year.