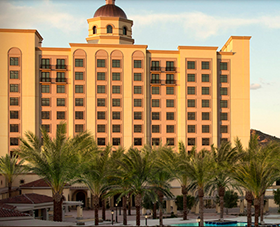 “More than 1.5 million people have played Game King Video Poker at DoubleDown Casino since its launch in April, making it our fastest growing table game,” said John Clelland, Vice President of Global Marketing at IGT Interactive Group. “The Game King Championship Tournament spans several platforms which will result in the largest group of poker players ever competing against each other.”

More than 250,000 DoubleDown Casino players have qualified to play, currently making this the largest mobile and social poker tournament ever. There is no cost to participate; entrants can qualify to play on DoubleDown Casino via Facebook, iOS and Android app or through Casino Del Sol’s website before July 29, 2013. After the qualifying period, five lucky winners will receive airfare, transportation, two nights at Casino Del Sol resort as well as a $200 resort credit. Players will then bring their video poker skills to the next phase of the tournament on location at Casino Del Sol in Tucson, Arizona on August 24 and 25 where they will compete in the finals for the chance to be named The Game King Champion.

“The Game King Video Poker Championship done in partnership with Casino Del Sol is a perfect example of how the convergence of mobile and social gaming impacts the casino gaming industry,” said Robert Melendres, Executive Vice President of IGT Interactive Group. “IGT has partnered with over 40 casinos who are integrating IGT’s DoubleDown Casino into their plans to reach audiences online and grow through mobile and social platforms.”

“We are excited about our partnership with IGT and our position as a key player in the largest mobile and social poker tournament ever,” said Brian Hoeffner, Vice President of Gaming for Casino Del Sol Resort. “The integration of DoubleDown Casino has enabled us to be on the forefront of the casino gaming industry.”

Today, Game King provides over 95 percent of video poker games throughout casinos worldwide. DoubleDown is the exclusive online provider of Game King poker and currently the only social casino to provide its games in French, German, Spanish, and now, Italian.