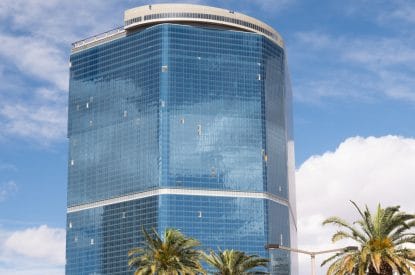 The Drew Las Vegas, the new casino resort taking shape in the carcass of the former Fontainebleau, won’t open now until the second quarter of 2022.

The opening of the casino at the northern end of the Strip has been pushed back by 18 months by real estate developer Witkoff who bought the unfinished casino for.

It has appointed Diller Scofidio + Renfro to be the design architect for the project for $750m from businessman Carl Icahn.

Witkoff CEO and Chairman Steven Witkoff said: “”We believe Drew Las Vegas is set to usher in the next generation of Las Vegas resorts. It will be unlike anything on the Strip today – a truly integrated resort that brings together a unique take on Las Vegas and curated set of experiences from around the world. We are thrilled to be working with such a prestigious and visionary firm as Diller Scofidio + Renfro. Our organizations share a commitment to challenging convention by seeking out original, transformative outcomes.”

Charles Renfro, Diller Scofidio + Renfro Partner and lead designer of the Drew, added: “The team’s design approach was inspired by the multiple ecologies of Las Vegas itself – the dynamic and rugged beauty of the Mojave Desert, Las Vegas’early adoption of modern architecture, and the city’s enthusiastic embrace of spectacle. The Drew will weave these seemingly contradictory conditions into a new quixotic environment.”

Drew Las Vegas will be DS+R’s first Las Vegas concept and among its first forays into hospitality.

“We are incredibly excited about being part of the Las Vegas landscape. Robust demand drivers continue to create an imbalance of hotel inventory supply and demand. The Drew is poised to not only capitalize on this imbalance, but also offer visitors a new marquee luxury resort with a distinctive, compelling concept. This is a once-in-a-lifetime opportunity for our team and our partners,” said Mr. Witkoff.

With a confirmed opening date in the second quarter of 2022, Drew Las Vegas has also kicked off its sales efforts to group customers. The initial response to the 3,780-room resort has been overwhelmingly positive as groups look for new ideas.

Drew Las Vegas will feature nearly 3,800 rooms and suites and will include the unveiling of Marriott International’s EDITION brand in Las Vegas, the house the first JW Marriott hotel on the Strip. Drew Las Vegas will also debut its own hotel brand – The Reserve by Drew.

In addition to its hotels, the resort will also include 550,000 square feet of convention and meeting space, retail, food and beverage, and entertainment facilities, and of course, a gaming floor.