US – Fahrenkopf gets mobile with Joingo appointment 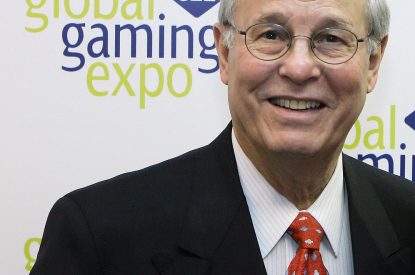 Former President and CEO of the American Gaming Association Frank Fahrenkopf has joined Joingo, a specialist in mobile engagement solutions for the casino industry, as Strategic Advisor.

Mr. Fahrenkopf is one of casino gaming’s most respected leaders, having spent nearly two decades as the AGA’s first Chief Executive. Mr. Fahrenkopf is revered for not only successfully representing the casino industry in Washington DC, but also for unifying and advancing the industry through periods of great change and adversity.

“The addition of Mr. Fahrenkopf to our advisory team is a truly significant milestone for JOINGO,” commented Seamus McGill, President at Joingo. “His involvement will allow us to draw upon his unmatched knowledge and experience in the casino gaming sector.”

“Mobile is positioned to make an indelible impact on the casino gaming industry. Particularly as the legalization of online wagering is being examined, which is a subject that I am vehement about,” said Mr. Fahrenkopf. “I am pleased to provide JOINGO with the guidance and leadership that will help the company to fulfil the significant potential that exists through the convergence of mobile technology and casino gaming.”

Mr. Fahrenkopf is a former chairman of the Republican National Committee, where he led the party through successful presidential elections in 1984 and 1988. He continues to serve as co-chairman of the Commission on Presidential Debates, is a member of the board of directors of the International Republican Institute, and sits on the Council on American Politics. A respected lawyer, he serves on the board of directors of several NYSE companies, and is also a Fellow at the Harvard Institute of Politics at the Harvard Kennedy School.