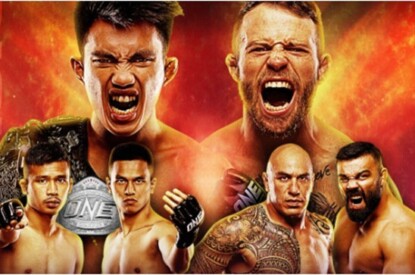 ONE Championship (ONE), the largest martial arts organization in the world, and FanDuel, the premier online gaming company in North America, have inked a new deal that will bring ONE Championship’s action-packed martial arts events to the newly launched FanDuel TV network.

The partnership, featuring weekly Asia primetime events officially kicks off on Friday, January 20. To give viewers an early preview of the content to come, FanDuel TV will also air ONE 164: Pacio vs. Brooks this Saturday, December 3.

This partnership with ONE will mark the first time that martial arts events are available on FanDuel TV, providing fans and viewers with a new avenue to connect with the sport through viewership and wagering.

“We’re eager to continue expanding the variety of content we’re offering at FanDuel TV to introduce our audience to emerging sports,” said Mike Raffensperger, Chief Commercial Officer, FanDuel. “We’ve long respected the content the ONE Championship team is producing and are looking forward to bringing their action to our audience through FanDuel TV and FanDuel+.”

“We are thrilled to join the FanDuel TV lineup and give our passionate U.S. audience yet another way to engage with ONE Championship,” said Chatri Sityodtong, Chairman and CEO, ONE Championship. “Having a quality partner in FanDuel will help raise the profile of our company in the region and provide their viewers with action-packed martial arts events like they have never seen before.”

This new content offering joins an already robust lineup of original shows on the network including Kay Adams’ morning show Up & Adams; the recently launched NBA-centric show Run It Back with Michelle Beadle, Chandler Parsons and Shams Charania; More Ways To Win with Lisa Kerney; as well as FanDuel’s signature horse racing coverage and syndicated content from Pat McAfee and The Ringer. In continued efforts to diversify content, FanDuel TV and FanDuel+ are also airing more than 3,000 hours of live sports including international basketball league action from the National Basketball League (NBL) Australia’s professional league, the Chinese Basketball League, as well as the French and German pro leagues as part of a licensing agreement with Sportradar.

FanDuel+ can be downloaded on Roku, Amazon Fire, Apple TV connected devices and is free to watch using a FanDuel account number.

ONE Championship is a top-five global sports property for digital viewership and engagement, according to Nielsen. ONE events represent the full spectrum of martial arts, with world-class athletes representing more than 80 countries competing across MMA, Muay Thai, kickboxing, submission grappling and more.