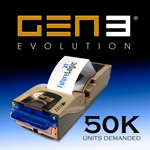 “Responding to our customers’ needs has enabled FutureLogic to ship more than 1.5 million TITO printers worldwide since 2000, which is more than all other competing manufacturers combined,” said Nick Micalizzi, VP of Sales and Marketing, North America. “We look ahead to continued success with the GEN3 Evolution printer as operators seek to take advantage of FutureLogic’s industry-ldeaing technology. In order to benefit from the GEN3 Evolution’s superior printing, promotional couponing capabilities, and advanced feature set, operators should request the GEN3 Evolution printer for all existing and new gaming machine purchases,” recommended Micalizzi.

Generations ahead of printers from competing manufacturers, operators and EGMs looking for the most innovative, fastest, and most reliable TITO/coupon printer with outstanding support and service, are specifying FutureLogic’s GEN3 Evolution printer. The GEN3 Evolution printer is equipped with the industry’s largest standard paper capacity of 450 tickets, saving operators up to 30 refills or $300 per printer annually. Further reducing costs, FutureLogic printers eliminate paper waste by taking the ticket stack down to the last ticket. Operators can easily update firmware in a flash, by simply connecting a pre-loaded thumb drive to a printer while it’s still in the slot machine, yielding a significantly reduced down time for each and every slot machine on the casino floor. Moreover, at eight inches per second, the GEN3 Evolution printer is also the fastest printer in gaming, printing and presenting a ticket/coupon in less than one second. Designed with promotional couponing in mind, the GEN3 Evolution printer offers an optional on-board promotional system module that creates separate and secure processing environments for both TITO and promotional couponing. This optional module also makes precision grayscale printing a possibility through an advance temperature control technology, yielding the highest resolution output for printing eye-catching promotional coupons.