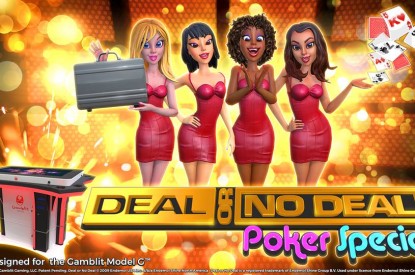 Gamblit Gaming has announced a strategic collaboration with Endemol Shine Gaming, part of Endemol Shine Group, the global content creator, producer and distributor behind Deal or No Deal, to gamblify the legendary TV show and turn it into a high-energy casino experience. One of the most successful gameshows of all time, Deal or No Deal originally launched in 2000, and has travelled to 75 territories around the world.

Deal or No Deal Poker Special will hit casino floors on Gamblit’s Model G interactive multiplayer game table and Deal or No Deal Poker will offer an engaging single-player experience on Gamblit’s TriStation™ hardware. Both titles set to launch in 2018, will feature exciting real-money gaming mechanics as players compete to uncover the highest value briefcase in the ultimate challenge of striking a deal to win big or risking it all. The creative team at Endemol Shine Gaming is working closely with Gamblit Gaming’s internal games team to enhance the Deal or No Deal experience with real-money wagering elements while maintaining the core gameplay that has made the show a fan-favorite around the globe.

“I’ve loved Deal or No Deal ever since I watched the first episode with my family,” said Darion Lowenstein, Chief Marketing Officer at Gamblit Gaming. “Now being able to re-create the excitement, intensity and pure FUN of the massive global hit show with friends or as a single player in the modern arcade – the casino – is both a personal and career high.”

Owain Walbyoff, Managing Director, Endemol Shine Gaming added: “Endemol Shine Gaming have an extensive portfolio of world-renowned brands and we are always looking for fresh and original ways for players to enjoy them. With trusted partners Gamblit Gaming, we are delighted to launch a brand new way of playing Deal or No Deal in this innovative style of skill based gaming.”

Gamblit Gaming develops and publishes a wide variety of games that bring a casual, arcade sense of fun and skill into the casino market. Gamblit Gaming also works closely with game developers to gamblify and publish their hit games into new markets, tapping into the exciting atmosphere of land-based casinos, activating a broader audience and new revenue stream. Gamblit Gaming provides all of the technology, gambling expertise, operations, account management, security, gambling licenses, regulations and compliance elements needed. The company also helps casino operators deliver a compelling entertainment experience to not only attract new players, but retain existing users. Through Gamblit Gaming, casino operators can compete on innovation while driving growth and revenue.