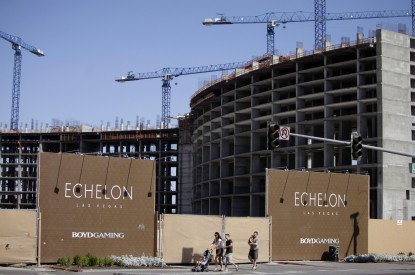 In a move that few expected, Genting group has entered the Las Vegas strip casino market having bought the stalled Echelon site from Boyd Gaming for $350m in cash.

Genting said it will transform the unfinished project into Resorts World Las Vegas, starting work in 2014, and opening in 2016 with 3,500 hotel rooms, a convention centre and a 4,000-seat theatre.

CEO KT Lim said: “This is an unparalleled opportunity to showcase what has made the Resorts World brand a globally recognised success for the past several decades. Genting intends to undertake the development, either singly or jointly with other parties, and will announce the details of the development plans in due course. The land has approximately 1,523 feet of frontage on the Las Vegas Strip and is zoned as H-1, which allows for the development of gaming enterprises, compatible commercial and mixed commercial/residential uses. It also lies entirely within the gaming enterprise district, which allows for application for a non-restricted gaming license and permitted gaming throughout the site.”

Baccarat has been booming on the Strip in recent months with Genting clearly thinking a far-eastern gaming brand could create a stir on the strip. Adding Las Vegas to a Resorts World brochure that already includes Malaysia, Singapore, The Philippines, New York and soon Birmingham certainly cements the group’s charge as an international operator.

Genting’s plans in Las Vegas re believed to include bronze- and gold-hued glass towers alongside Asian-style red pagodas, lagoons and fountains. The Malaysian group has found itself cash rich through its operations in Malaysia, Singapore and The Philippines and has been aggressive in its attempts to open a resort casino in Miami. It actually has a long standing in US gambling market having funded the original development of Foxwoods Indian casino in Connecticut, and having built Resorts World New York in Queens.

Echelon and Fontainebleau had become unfinished monuments of the economy crashing in Las Vegas.

The property on the northern end of the Las Vegas Strip should have opened as a mixed-use development complete with 5,000 rooms in six hotels in 2010.  The Stardust resort was demolished in 2007 to make way for the $4.8bn project. Few had expected any new projects to be announced in Las Vegas for at least five years.

Jeremy Aguero, a Las Vegas economist and consultant, said: “This is a game changer. I certainly didn’t expect something like this would happen quite this early. People were expecting a big new casino in Las Vegas was still three to five years away.”

The sale agreement includes both the 87-acre land parcel as well as all improvements to the site. A portion of the proceeds will be paid to a third party to fulfil the Company’s obligations to LVE Energy Partners, LLC.  Following this payment and other closing costs, Boyd Gaming expects to receive approximately $157m  in net proceeds from the transaction.

Keith Smith, President and Chief Executive Officer of Boyd Gaming, said: “Our highest priority is strengthening our balance sheet.  The sale of the Echelon site is another important step in the on-going effort to improve our long-term financial position. While we remain committed to the Las Vegas market, we determined that developing a large-scale project on the Las Vegas Strip was not consistent with our current strategy.”