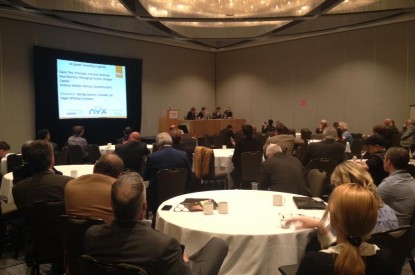 GiGse 2015 has been hailed as the most productive and interactive edition of the annual iGaming industry gathering so far by leading influencers who attended last month’s event at the Hyatt Regency in San Francisco, California.

GiGse brought together top decision-makers from within and outside the sector to offer their perspectives of some of the key issues facing the gaming industry in the expanding gaming hub of California as well as across the US and beyond.

The Open Space meeting methodology – which underpinned debates, discussions and networking opportunities surrounding topics as diverse as regulation to social and skill-based gaming – was a particularly popular concept for attendees.

“I thought the Open Space format worked really well in the Tribal discussions because it allowed an open and honest dialogue among the participants. I walked away with a better understanding of some very complicated issues,” Victor Rocha, the Editor and Owner of Pechanga.net, said. “The thing that GiGse does best is to create an environment where high level executives and stakeholders discuss the important issues of the industry with complete honesty and candour. It must be something in the water. I always walk away with a head full of ideas.”

Open Space, which allows participants to create and manage their own agenda of parallel sessions around a central theme of strategic importance, took place at GiGse last month after being tested out at the event’s advisory board meeting in September.

“I enjoyed GiGse immensely and the Open Space concept encouraged a lot of excellent interaction,” said Lloyd D. Levenson, the CEO of Cooper Levenson Attorneys at Law and Chairman of the firm’s Casino and I-Gaming Law Practice Group. “That format enabled people who would not have otherwise met to become part of a discussion group, and a major part of GiGse is meeting people and networking. The discussions were excellent this year.”

Levenson, like many attendees this year, found it particularly useful to gain a broader perspective of the evolving gaming sector at GiGse.

“I found it fascinating to find out what is going on in the world of lotteries, particularly as that is not a sector I have really focused on in my 31 years in gaming,” he added. “It is also always good to hear about sports wagering and the potential legality of that in the US. There was a very informative panel on the topic, and to have the NBA represented on the panel was a real catch.”

“There was a nice amount of discussion around regulated sports betting and also new emerging technology in the gaming space,” Ifrah said, before praising the quality of other discussions at the event. “The most exciting panel to me personally was the panel on eSports. I have been predicting growth in that market for the past year and the statistics discussed at the conference reflected the explosive growth of the eSports industry. It is fascinating to watch this sector.”

For Ifrah and other GiGse attendees, last month’s event in San Francisco helped to set the agenda for future major developments in the gaming sector, all against the backdrop of a host city that is on the cusp of innovation.

“The conference continues to attract top leaders and visionaries in all areas of gaming. The setting in the Silicon Valley area where big technology lives is also just right,” Ifrah added.
“GiGse is the perfect conference for anyone in gaming, and it has done a tremendous job of always staying current and even ahead of the gaming market trends, which is not a simple task.”