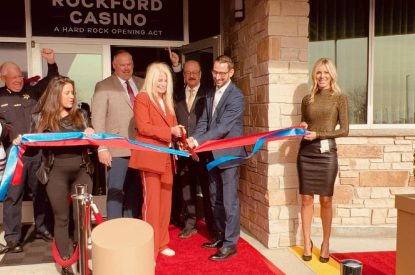 Hard Rock International has held a ribbon-cutting ceremony to open its temporary casino in Rockford in Illinois.

Featuring over 37,000 square feet of gaming space, A Hard Rock Opening Act offers more than 625 of the newest slots and top-graded Interblock Electronic Table Games. In addition to entertainment, the casino is also home to two unique restaurants, including an upscale and casual option, as well as a pop-up retail shop, offering the brand’s signature Rock Shop merchandise. Open 24/7 with ample parking, A Hard Rock Opening Act delivers the legendary vibe of the Hard Rock brand with both the charm of Midwest hospitality and vigor of the Rockford community.

“We knew from day one that Rockford was the best fit for our casino, thanks to their energy and passion for this project as well as our great working relationship with local leaders,” said Jon Lucas, COO of Hard Rock International. “As this project moved forward, we made it a priority to bring on new vendors and team members from the greater Rockford area to further ingrain ourselves in this community and reaffirm the commitment we made from day one to be an active member of this region for years to come.”

Located at the intersection of East State Street and Bell School Roads The Rockford Casino is an opening act destined to transform into the headliner when the permanent Hard Rock Casino is completed one mile east of the current site near I-90. From entertainment to community impact, both casino projects are expected to create more than 1,000 jobs in addition to tax revenue and economic impacts across the region and state.

Putting their philanthropic efforts in motion, Hard Rock presented $25,000 checks to local non-profit organizations Rockford Promise, an organization providing full-tuition college scholarships to Rockford Public School graduates, and the International Women’s Baseball Center (IWBC), the only center of its kind in the world, dedicated to celebrating and encouraging females to participate in sports-related activities, industries and careers. The planned development will be located adjacent to Beyer Field, the home of the historic “Rockford Peaches” women’s baseball team which began in 1943 by Philip Wrigley, former owner of the Chicago Cubs.

“The Rockford community has been wanting and waiting for a casino for nearly three decades,” said Rockford Mayor Tom McNamara. “After much hard work by the community, City staff, and Hard Rock, today marks a pivotal moment in our history with the opening of the Hard Rock Rockford Casino. This new facility will be a regional destination for visitors, as well as an economic driver in our community by providing hundreds of jobs to our residents.”

For quite some time, Rockford has been floated as a potential casino site during past gaming expansion efforts, but it wasn’t until recently that the potential of a Rockford casino changed from an ‘if’ to a ‘when’. Upon passage of Governor Pritzker’s massive gaming expansion bill in June 2019, Rockford leaders moved quickly to review proposed bids, settling on the Hard Rock proposal for the former Clock Tower site, just east of I-90. Citing Hard Rock as the only proposal offering a realistic and sustainable financing structure, Rockford then submitted a single, joint application to the state. That following October, Rockford became the first of six sites included in the 2019 gaming package to receive licensing approval, a historical win for Hard Rock and the City of Rockford.

“I’ve visited over half of the Hard Rock locations throughout the world and have seen my guitars in almost every one of them and now, they’ve made it to Rockford,” says Rock & Roll Legend and Rockford native Rick Nielsen of Cheap Trick. “I could not be more excited to showcase my collection of guitars with my Rockford neighbors, friends and those visiting our region.”

“Every great concert begins with an opening act. This casino is no different,” Lucas added. “As demonstrated at today’s ceremony, A Hard Rock Opening Act sets up a bright future for Rockford that will only be solidified by the opening of the permanent casino.”