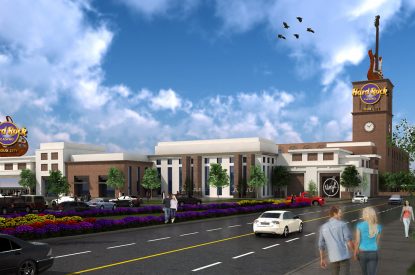 The Iowa Racing and Gaming Commission has awarded a state gaming license to the developer of a Hard Rock-branded casino and hotel.

The $118.5m project, to be housed in the historic Battery Building in downtown Sioux City, beat off opposition from three rival projects; including two from Penn National Gaming, which owns and operates the Argosy Sioux City riverboat. This property will now be pushed out of the market when the Hard Rock opens in the summer of 2014. The new Hard Rock would cover 100,000 sq. ft. with 30,000 sq. ft. of gaming space with about 800 slot machines and 32 table games, as well as a 60-room hotel, sports-themed bar and retail. Located in the Downtown District on the site of the Battery Building, the Hard Rock Casino Sioux City project would feature. two specialty restaurants and a buffet that would serve up a multitude of dining options throughout the day. Retail options, including a Hard Rock Casino store offering mementoes bearing the iconic name, would attract tourists and locals alike. The development budget is in excess of $100m. Plans also include a live entertainment venue to showcase nationally recognized brands as well as top local and regional talent.

The Iowa Racing Board welcomed applications in 2012 for a new land-based casino for Woodbury County to replace the Argosy. Iowa law requires every casino to be ‘sponsored’ by a qualified non-profit organization and for 20 years. In this case that task has been granted to Missouri River Historical Development.  All of the applicants for the new land-based casino sought to align with Missouri River Historical Development, who chose to sponsor one project: the Hard Rock Hotel & Casino Sioux City.

Bill Warnar, President of Sioux City Entertainment, said: “The team at the Hard Rock Casino Sioux City are very excited at the opportunity to enhance the already vibrant entertainment scene in Sioux City, which has been established by the Tyson Evenets Center and the Orpheum Theater. We believe it will be a great fit, introducing an iconic destination experience for people around the country with exciting entertainment and amenities. This will be an excellent combination of the history and culture of Sioux City with the world recognised brand that is the Hard Rock Hotel and Casino. Our goal is to combine the authentic culture, strong musical appreciation, and deep sense of belonging unique to Sioux City with one of the most recognizable entertainment brands in the world: The Hard Rock Casino, becoming a celebrated destination for both locals and tourists alike”

The decision has prompted criticism from Penn who had wanted to develop a downtown site for a Hollywood-themed casino. Penn has become the first Iowa operator forced out of the market through competitive bidding since the state legalised casino gambling in 1989.

Peter Carlino, CEO of Penn, said the decision was a ‘mystifying and actual shameful development.’

The Commission said the Hard Rock proposed the best option to grow casino revenues, tourism and economic activity in the state.

IRGC Chairman Jeff Lamberti said: “I just felt there was a slight edge on the overall economic impact for Hard Rock.”

Mark Monson, President of Missouri River Historical Development, said: “The MRHD Board is thrilled with the preservation of an existing landmark and Sioux City Entertainment’s embracing of the history and culture of our community. This facility will become a destination for people around the country with exciting entertainment and amenities. The Hard Rock Casino raises the bar in our community for years to come.

Sioux City Mayor Bob Scott added: “Not only are we projecting a significant increase in jobs from the Hard Rock Casino Sioux City, but we also believe it will serve as a catalyst to ignite a downtown renaissance, further expanding the entertainment hub of Sioux City. We have enjoyed working with the Sioux City Entertainment staff and will continue to do our best to make sure we are successful in locating a new casino in downtown Sioux City.”