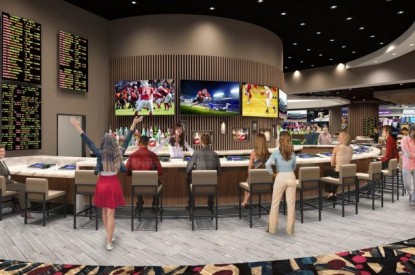 By opening a new sports bar called the 406 Club in time for the start of the new football season, Harrah’s Gulf Coast is looking to bring a little bit of old Biloxi into its casino.

The 406 Club is phase two of the sportsbook at Harrah’s Gulf Coast Casino and is a nostalgic nod to the original 406 Club which was aa known bookie joint in downtown Biloxi, Mississippi.

The new 406 Club will have three Fan Caves, where people can go to watch the game on their own televisionor play a game on the Xbox system stashed in each cave. The 406 Club will be centrally located on the casino floor. The new technology for sports betting will allow fans at Harrah’s to use kiosks to make in-moment sports wagers powered by Scientific Games’ OpenBet Technology.

The club will be the first in the state equipped with Bar Top Gaming by Interblock. These devices feature 18 games, allowing people to play up to four traditional casino games at once like blackjack and non-traditional games simultaneously.

The 406 Club will also have interactive LCD screens that will keep up with the action of the games while fans eat, drink, listen to live music and play their favorite bar games, including beer pong, shuffleboard and foosball.
The new addition will complement The Book, the current sports wagering venue at the casino, which opened in August 2018 following the legalisation of sports betting in Mississippi. The design for 406 Club draws inspiration from the sports entertainment venue at The Linq, a Caesars property in Las Vegas. It is expected to open in August.

Jonathan Jones, General Manager of Harrah’s Gulf Coast, said “When we opened The Book last August, we knew it was the first phase of many in the sports betting and entertainment arena for our casino and resort. The construction and launch of 406 Club is the next step in that evolution, and is made all the more exciting by our parent company, Caesars Entertainment’s, exclusive, first-ever casino partnership with the NFL. That partnership, coupled with last month’s announcement of a new collaboration with ESPN, makes Harrah’s Gulf Coast the authority on the Coast for sports betting and entertainment.”