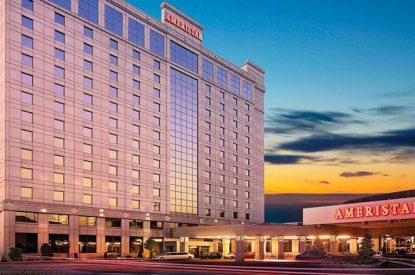 Indiana’s sportsbooks reversed their February dip, using a completely home-grown NCAA Tournament to push monthly betting volume past the $300m mark, according to PlayIndiana, which provides news and analysis of the state’s gaming industry.

“We expect to see high volume across most legal US markets in March, but Indiana’s circumstances were unique with March Madness played entirely in Indiana,” said Jessica Welman, lead analyst at PlayIndiana. “It’s hard to know just how much it moved the needle, but March’s results were clearly fueled by a huge volume of NCAA Tournament games all in one place and by a number of fans who traveled to Indiana and then bet legally as they attended games. We may never see a betting event quite like that ever again.”

Indiana sportsbooks brought in $316.7m in wagers in March, according to official reporting released Monday. That is the second-most for a month in Indiana and up 15.6 per cent from $273.9m in February. Only January’s record of $348.2m topped March’s results, pushing Indiana’s lifetime handle to $3.1bn since launch.

Sportsbooks generated $26.4m in revenue, a 55.4 per cent increase from $17m in February, and only topped by the record $29.3m set in January. March’s revenue yielded $2.5m in state taxes.

“What a difference a year makes, even if comparing this year to last year is apples and oranges,” said Nicole Russo, analyst for PlayIndiana. “Beyond the shutdowns, so much has changed in Indiana’s landscape. Yet, the state continues to fare well in large part because its regulatory framework has been fair and unlike its neighbors in Illinois, consistent. That has created a resilient state industry able to withstand increased competition from neighboring states and a brutal pandemic.”

Online betting accounted for 88.1 per cent, or $279.2m, of the state’s handle, a modest decrease from 88.4 per cent in February. $160.6m of March’s bets were on basketball, a dramatic increase from $127.2m in February as March Madness gripped the attention of bettors. That came even as Purdue, the lone Indiana representative in the NCAA Tournament among the state’s 10 Division I men’s programs, was knocked out in the first round.

“For a basketball-crazy state like Indiana, a dearth of local teams could have really lowered the state’s handle,” Welman said. “But it appears that the proximity of the tournament made up for a lack of Indiana representation.”

$37.5m in bets were placed at retail sportsbooks In March, up from $32.9m in February. Hollywood Lawrenceburg, nearest Cincinnati, led the retail market with $10.8m in wagers. Ameristar East Chicago was second with $6.2m.

Operators in Indiana may also receive a boost from Illinois, where Gov. J.B. Pritzker reinstated in-person registration for that state’s online sportsbooks. That decision could make traveling across the border from the Chicago area more appealing, at least for some.

“Indiana has always been a market that has capitalized on large markets just across its borders,” Russo said. “Illinois’ decision could modestly move the needle, especially for the Chicago-area casinos that have always counted on out-of-state bettors as a significant portion of their customer base.”