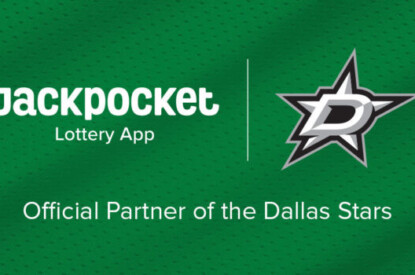 Jackpocket, the first third-party app in the US to provide a secure way to order official state lottery tickets, and the NHL’s Dallas Stars has announced a new partnership making Jackpocket the team’s Official Digital Lottery Courier Partner.

The deal, which starts in the 2022-23 hockey season and will then run for the next three years, is an exclusive arrangement with the NHL team located in the Dallas-Fort Worth Metroplex.

“We’re thrilled to announce our latest major sports franchise partnership with the Dallas Stars, the only NHL team in Texas,” said Jackpocket founder and CEO Peter Sullivan. “As the team’s Official Digital Lottery Courier, we’re excited to start this new partnership and look forward to seeing our logo featured on the Stars scoreboard at Dallas’ American Airlines Center.”

New users can enter the promo code “STARS” at checkout to get their first lottery ticket for free. Additionally, Jackpocket will be running multiple sweepstakes throughout the hockey season with some major prizes for Stars fans, including once-in-a-lifetime experiences such as behind-the-scenes access, flights to away games, home game tickets, and more. The Stars will also offer VIP experiences to sweepstakes winners like exclusive pre-game penalty box visits, the opportunity to participate in the Stars First Look during intermission, autographed team gear, and special events like Casino Night.

“We are excited to launch this new partnership with Jackpocket and bring the excitement and convenience of its digital lottery courier app to our great fans,” said Dallas Stars President and Chief Executive Officer Brad Alberts. “Jackpocket is going to be our trusted partner, and we could not be more excited about working together to elevate our game-day experiences for our most loyal fans.”

Jackpocket ranked as the #1 free app in the entire App Store during July’s historic Mega Millions run and was recently included in the top 10 during the historic Powerball drawing in November.