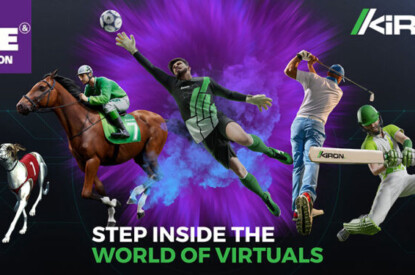 Kiron Interactive is set to showcase its highly anticipated 2023 line-up of innovative new products at ICE London next month.

Ready to exhibit its market-leading portfolio at stand S2-110, the supplier of virtual sports
and numbers games is on track to build on its impressive momentum from 2022, which saw significant commercial success with the addition of quality content and a range of fresh products.

“We are excited to be heading back to ICE London once again, an event which certainly brings the entire industry together,” said Steven Spartinos, co-CEO of Kiron. “It’s great to start 2023 by seeing all our clients face-to-face and being able to showcase to the wider industry our latest product launches and upgrades.

The launch of instant-win games, iGoal and Up ‘n Down that were previewed at the flagship event last year and have since gained enormous popularity amongst players, has been further expanded upon and features the same high-frequency, on-demand, 24/7 gameplay which offers a wide array of bet markets and captivating visuals.

Kiron’s latest virtual sports titles, Cricket: Final Over and Super Over are also now available and are designed to be the definitive choice for the sport’s legions of fans. Both action-packed games are a recreation of the sports’ famous nail-biting final plays where competing sides each have an over to outscore the other to win the match.

Show visitors will also be able to learn more about the upcoming additions to the provider’s premier library, with Champions League set to follow in the footsteps of its World Cup-themed Tournaments product.

The new title, based on the biggest club football competition in the world, will adopt the same high-frequency format, recreating the thrills of the group and knock-out stages. The action is delivered using cutting-edge animation and market-leading betting algorithms and is enhanced by a captivating user interface (UI) with quick betting options, live commentary and instantly viewable winnings.

Alongside the introduction of new products, Kiron has made several enhancements to its incredibly popular flagship football title, Goal, which will see new graphic enhancements making the overall experience more realistic and immersive for players.

“After an incredibly successful previous twelve months, this is set to be a big year for Kiron as we celebrate our 10-year milestone in Italy and look for further growth across regulated markets,” said Spartinos. “You can expect a number of key product launches and partnerships to be announced in the coming months as we grow our position as a trusted partner to leading operators around the globe.”