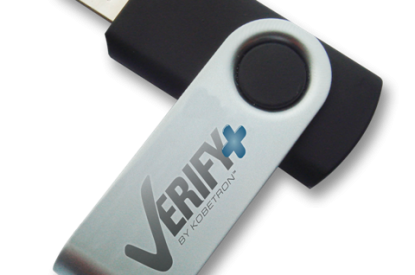 Guaranteeing compliance just became easier for regulators, operators and suppliers with the release of the new Verify+ by Kobetron signature verification tool.

Verify+ by Kobetron is a USB tool that puts virtually every new signature method and feature at the user’s fingertips, empowering them to maximize compliance and efficiencies.

“We are very excited to bring Verify+ by Kobetron to the gaming industry. Instead of worrying about checking devices against a multitude of signature methods, Verify+ by Kobetron will help regulators, operators and suppliers streamline operations, save time, save money and increase compliance by putting nearly every signature method all in one place. It’s a direct result of feedback we have received from regulators, and we were very happy to collaborate with GLI to bring the tool to life,” said Kobetron President Greg Kobe.

GLI President/CEO James Maida said: “We work closely with regulators, operators and suppliers from around the world every day, and we listen to their feedback. In those discussions, we came to understand that our GLI Verify and Kobetron’s verification tools produced the same or similar signatures, creating more work and potential for human error. We solved that problem by merging these previous tools into Verify+ by Kobetron.

“At GLI we recognise that GLI’s core competency and expertise is in testing, and that we developed GLI Verify as a signature tool to accommodate the needs of our clients. We realize there are myriad signature tools and methods out in the market, and that a singular verification tool is what is best for the industry.”

Mr. Maida continued: “We also recognize that Kobetron’s core competency is in developing signature algorithms and tools to support software verification. This partnership with Kobetron has allowed GLI to further maintain its independence as a test lab by partnering with a third-party company and the foremost expert on developing verification applications.”

Verify+ by Kobetron is the result of a collaborative effort between Kobetron and Gaming Laboratories International (GLI), and replaces Kobetron tools RD-700, LT-400 and SI-500, as well as GLI Verify.
Verify+ by Kobetron contains all of the functionality of the RD-700, LT-400 and SI-500 and is backward compatible to previous versions of Kobetron and GLI verification software. It also supports all verification from other test labs, independent and government.

With the release of this new tool, GLI will soon announce the end of life for GLI Verify v7.0, and the company will not add any new features to the software.