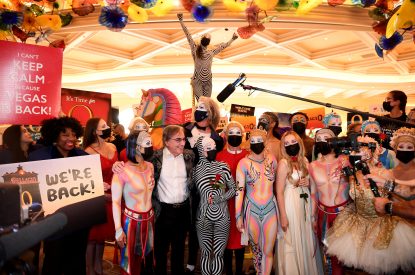 MGM Resorts International, a global leader in live entertainment and sports, is kick-starting Las Vegas’ return to the Entertainment Capital of the World, bringing back the industry’s biggest names this month with the likes of “O” by Cirque du Soleil, Bruno Mars, Dave Chappelle, Conor McGregor and others.

One of the world’s best-selling theatrical productions of all time – “O” by Cirque du Soleil, which has been enjoyed by more than 17 million people from around the globe has already celebrated its first performance in 16 months at Bellagio in front of a sold-out crowd. Prior to taking the stage, cast and crew of the iconic aquatic show paraded through the resort, welcomed back by Bellagio employees and delighting thousands of fans. Cirque’s flagship production features incredible acrobats and synchronized swimmers performing 60-foot high dives in a 1.5-million-gallon pool.

“For the past 16 months, we’ve waited patiently to reignite the heartbeat of Las Vegas with our large-scale shows, sporting events and nightlife — and this weekend marks a major milestone for the full recovery of our city,” said Bill Hornbuckle, MGM Resorts International’s CEO and President. “Millions of people travel from around the world to experience the unique entertainment only Las Vegas offers, and with the return of names like Bruno, Chappelle and Cirque, we are letting them know it’s time to come back.”

Daniel Lamarre, President and CEO, Cirque du Soleil Entertainment Group, said, “‘O’ has been a fan favorite and source of pride for Cirque du Soleil since it first opened at Bellagio in 1998. As we continue to look forward with fresh hope, the grand reopening of one of the shows that has made Cirque du Soleil what it is today – a global leader in live entertainment – is a milestone we want to celebrate. Intermission is over! Let the show begin.”

Beginning this month, MGM Resorts will welcome back many of the entertainers and events visitors love about its Las Vegas properties:

“O” by Cirque du Soleil returned to Bellagio July 1 and will be followed by Michael Jackson ONE at Mandalay Bay on August 19 and The Beatles LOVE at The Mirage on August 26.
Bruno Mars will be the first artist returning to Park Theater at Park MGM July 2, performing two shows every weekend in July with more 2021 dates booked.
The iconic MGM Grand Garden Arena will set the stage for four sold-out Dave Chappelle shows the first two weekends in July starting July 2.

The Mirage entertainment lineup is back in full force with Shin Lim beginning Thursday, July 1 and the Aces of Comedy program returning in July with comedians like Tom Segura, Chelsea Handler, Gabriel Iglesias and Bill Maher booked throughout 2021.

The Concerts on the Beach series at Mandalay Bay Beach begins with a July 4 show featuring Sublime With Rome.

Michelob ULTRA Arena at Mandalay Bay will host the Men’s and Women’s USA Basketball teams beginning July 6 as they participate in training camps and play in multiple exhibition games over five days prior to departing for Tokyo.

The longest-running dinner show on the Las Vegas Strip, Tournament of Kings, returns Wednesday, July 14. For more details or to purchase tickets, visit here.
The return of these large-scale offerings rounds out the robust entertainment lineup MGM Resorts has reopened over the past eight months including David Copperfield, Jabbawockeez and Brad Garrett’s Comedy Club at MGM Grand; Carrot Top and Fantasy at Luxor; Terry Fator at New York-New York; and the Australian Bee Gees and Thunder from Down Under at Excalibur. A global force in entertainment, MGM Resorts is home to more than 20 world-class arenas, theaters and event grounds, selling 8 million* tickets annually for live events ranging from renowned artists such as The Rolling Stones, Cher and Bruno Mars, to vibrant music festivals and some of the biggest fights in combat sports history.