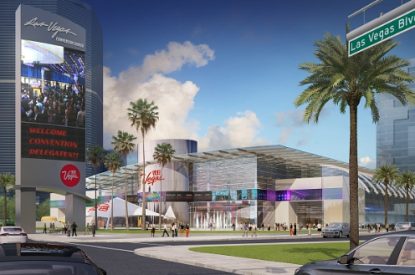 The Las Vegas Convention and Visitors Authority (LVCVA) Board of Directors have voted to approve a contract for the purchase of the historic Riviera Hotel & Casino’s 26-acre site as the cornerstone for its planned Las Vegas Global Business District.

“Today marks an exciting new milestone in Las Vegas’ long history of reinvention and evolution and ensures Las Vegas’ meeting and convention industry remains the envy of the world for decades to come,” said Rossi Ralenkotter, President/CEO of the LVCVA. “The Las Vegas Global Business District is the single most important economic development project in the state, and it will generate thousands of good-paying jobs and help lay a strong economic foundation for the benefit of the entire community. This strategic acquisition of land gives us the much-needed space for expansion while also providing a highly visible presence on one of the most famous streets in the world – the Las Vegas Strip – and is essential in helping us to reach our goal of 45m visitors.”

Under the agreement, the LVCVA will purchase the site for a total of $182.5m. Funds for the acquisition will be drawn from the LVCVA’s bank credit facility with JPMorgan. The LVCVA will issue long-term bonds to retire the bank credit within the next two years. Terms of these bonds will follow the standard public bonding process.

Nevada Governor Brian Sandoval said: “Las Vegas has proven time and again, its ability to reinvent itself as the economic engine for Southern Nevada. For the better part of 60 years, this historic property has created memories for millions of guests and will always have a place in the history of this great city. As the storied resort makes way for the Global Business District, this site will continue to play an integral role in the attraction of visitors to Nevada.”

The Las Vegas Global Business District is projected to bring 6,000 construction-period jobs to Southern Nevada, and the construction portion alone is projected to generate $3.6bn in economic activity. When the project is complete, the resulting increase in economic activity could sustain up to 6,000 permanent jobs and generate an estimated incremental economic impact of nearly $700m and $221m in wages and salaries.

The $2.3bn project is the largest economic development initiative the LVCVA has undertaken since the Las Vegas Convention Center was originally built in the late 1950s. The expansion project is expected to lead to an additional 480,000 new attendees as current conventions grow and through attracting an estimated 20 new trade shows and conventions.

The Riviera site is a key component of the LVCVA’s land acquisition strategy, providing an iconic entrance to the Global Business District on the world-famous Las Vegas Strip. Envisioned to be completed in two phases, the first phase focuses on the Riviera site and includes 750,000 square feet of new exhibit space and 187,500 square feet of supporting meeting space as part of the new 1.8m-square-foot expansion.

Phase two focuses on renovating the existing convention center and includes a 100,000-square-foot general session space and another 100,000 square feet of meeting space. Including public areas and service areas, the expansion and renovation increase the facility from its current total footprint of 3.2m square feet to nearly 5.7 million square feet. Once construction begins, the entire project is expected to take five to eight years to complete.

The owners and management of the Riviera Hotel & Casino have notified its employees and their union representatives of the agreement and are working with resort partners and the unions in identifying alternative employment options.

“We recognize the long-standing history and loyalty that many of our associates have demonstrated to the Riviera throughout the years. Tasked with handling the logistics of winding down the operation, we will focus our attention on the approximate 1,000 associates and many guests who have visited the property year after year. We will activate multiple resources and channels to assist in making a smooth transition for all those impacted,” said John Groom, Chief Operating Officer of Paragon Gaming, the management company for the Riviera Hotel & Casino.

“This is clearly an exciting opportunity for Las Vegas as a destination, and we wish nothing but success to the Las Vegas Convention and Visitors Authority as they look at ushering in a new era at this site,” said Rob Kunkle, President and General Manager of the Rivera Hotel & Casino.

In addition to the $2.3bn convention center expansion and renovation, the Las Vegas Global Business District is a visionary project that includes developing a district concept in the neighborhoods surrounding the center. The district would provide a distinct look and feel to the area and provide the opportunity for economic development related to the industry, including the development of a global business center that utilizes the facility’s World Trade Center designation to attract corporations wanting to interact with the tens of thousands of businesses who visit the convention center each year.
The Global Business District also includes plans for a centralized transportation hub that would be the centerpiece to a new transportation plan for the entire city. The LVCVA is working closely with the Regional Transportation Commission of Southern Nevada and transportation authorities and companies to develop a more efficient and expanded transportation system in the valley.