US – Las Vegas’ most iconic tower rebrands to The Strat 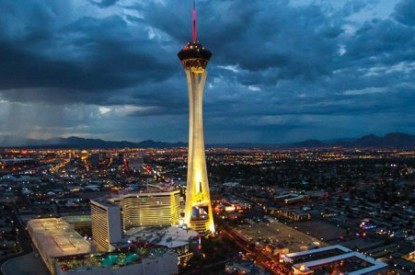 The Stratosphere, Casino, Hotel & Tower in Las Vegas is being rebranded to the Strat Hotel, Casino and SkyPod, a rebrand that embodies the revolution of the iconic property since Golden Entertainment, Inc. took ownership in late 2017.

The Strat will also partner with Aristocrat Technologies to debut the Link Lounge, named for the company’s popular “Link” game series, which will offer games such as Lighting Link, Dragon Link and Liberty Link. IGT’s electronic Dynasty table games will also be added to the casino floor.

“The Stratosphere is a Las Vegas icon, so in acquiring the property we chose to preserve that quality while also re-imagining the resort through a comprehensive remodel that spans from the tower to the main casino floor,” said Steve Arcana, executive vice president and chief operating officer of Golden Entertainment. “We have developed a new brand that speaks to the fun and excitement of this grand transformation and we are thrilled to announce The Strat.”

Golden Entertainment began its transformation of the property through a remodel that began in mid-2018. In June, The Strat introduced a new Baccarat gaming pit with six tables. In August, it unveiled the Elevate room series, a complete remodel of 311 rooms with new décor, furniture and amenities designed by award-winning architectural firm, Friedmutter Group. In September, it introduced an entirely new menu at its award-winning 360-degree rotating restaurant, Top of the World, serving steaks and seafood complemented by fresh, seasonal ingredients. Some of the standout selections include: a 14-ounce Wagyu ribeye from Tajima Ranch, a 2 ½ pound Maine Lobster and Ora King salmon fillet. Also introduced at that time was a new menu of craft cocktails and a new wine list with nearly 300 selections of hard-to-find, boutique selections as well as some of the world’s most celebrated wines.

In December, The Strat finalised a full remodel of Top of the World, complete with new Kinon® tables, reupholstered furniture and top-of-the-line place settings, including Messermeister steak knives.

In late December, The Strat debuted 108 Eats by James Trees, located on the 108th floor on the Observation Deck. Developed in partnership with Trees, 108 Eats serves chef-driven fresh paninis, inventive house-made ice creams and other treats.
The Strat will continue its evolution of the property in 2019 with the introduction of BLVD & Main Taphouse; View Lounge, offering a full bar and signature cocktails with views of the casino floor; and the Race and Sports Book, a fully remodeled sports book equipped with an immersive LED wraparound wall and the highest level of wagering technology, operated by William Hill. BLVD & Main, View Lounge and Sports Book and Race will open this spring at the northwest corner of the main casino floor, with convenient access from the main entrance. A full remodel of the indoor and outdoor Observation Decks on floors 108 and 109, respectively, will also be revealed this spring, along with 108 Drinks joining 108 Eats.