US – Luxor opens first dedicated esports venue on the Strip 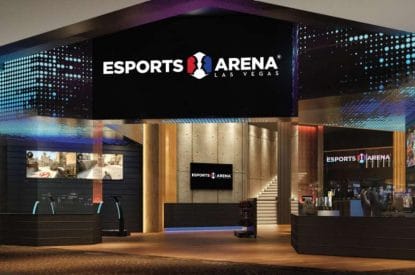 The 30,000-square-foot, multilevel arena is designed to host every form of competitive gaming, from daily play to high-stakes esports tournaments, and features a competition stage, 50-foot LED video wall, telescopic seating, PC and console gaming stations, and a network TV-quality production studio. Accompanying elements like virtual reality platforms, retro gaming consoles and a comprehensive menu by world-renowned chef José Andrés set the arena apart as an unrivaled esports entertainment experience for both casual and professional gamers, or even non-gamers who want an insider’s look at what’s quickly becoming one of the world’s most popular spectator sports.

“We opened Esports Arena Las Vegas to be the championship destination for our global network of properties and a daily hub for all gaming communities,” said Allied Esports CEO Jud Hannigan. “This city inspires excitement and anticipation like no other, making it the ideal location for our global epicenter of dedicated esports arenas. We’ve worked with MGM and Bellagio for 16 years with the World Poker Tour, so it was an easy conversation when we looked at where to place our Esports Arena. This is our marquee property, the Madison Square Garden of esports, and it fits in nicely with what MGM plans to do with Luxor.”

Chef José Andrés said: “I’m a gamer myself, and my team and I have had a lot of fun creating this menu – getting into the head of the gamer to determine what they will be craving when they play and compete. The menu is practical for the gaming environment, and delicious. Even if you aren’t a gamer, you will enjoy what we have to offer!”

Chris Grove, Managing Director of sports for research company Eilers & Krejcik Gaming, said: “This is the first facility of its kind to be dedicated to this form of gaming. With this venue, this team and this partner (MGM Resorts International), if they can’t make this work, I’m not sure who could at this point in time.”

The designer behind the venue was global leisure and entertainment leader, YWS Design & Architecture (YWS). Known for experience design, the firm’s most recent contributions to the Las Vegas strip include Topgolf and Hakkasan. “The rapport between Esports Arena Las Vegas and YWS was instant,” said Mr. Hannigan. “If any designer is going to listen to the players and fans and seek to understand the Esports culture, it’s YWS. Getting it right from an experience perspective is immensely important to them.”

The initial design concept for the venue will hold over 1,000 people and channels the fantasy, fun, energy and competition that the sport is known for. Designed as a true arena, the venue is crescent shaped and creates the hype and anticipation expected at a sporting event. The main floor has tournament game stations, retractable arena seating, gaming pods, console game stations, arcade games, a cocktail lounge with a small bite food menu, and a giant 50 foot LED screen for viewing live play and leader board updates. The second floor has a full bar, VIP suites, and a state of the art production broadcast booths for tournament viewing and streaming.

With a packed weekly event schedule, the Esports Arena Las Vegas will host tournaments, leagues, special and private events and is equipped with state of the art broadcast capabilities.

The multidimensional arena at Luxor provides guests with unique, immersive experiences throughout the space:

A Menu For Gamers, By Gamers – Celebrated chef and humanitarian José Andrés used his love of video games to design the first-ever culinary program for esports. The menu was designed to be practical for the gaming environment, and includes offerings like rice and poke bowls, sandwiches, salads, flatbreads, Maki and ice cream mochi. For the full menu, visit esportsarenavegas.com.

Virtual Reality – Two Virtuix Omni boards put players head-to-head in an immersive gaming environment. The compact virtual reality platform’s treadmill pad allows competitors to live out the action by running and moving through each game while staying in one place, like having an entire explorable world in one square meter.

Playing Through History – The History of Gaming exhibit sits beneath an impressive 360-degree video wall and a custom-built gaming controller chandelier. Eight generations of consoles give any visitor the chance to play history’s most beloved games for free, like Pong on the Atari or Super Mario on the NES.

VIP Upgrade – Five VIP rooms complete with their own gaming systems, dedicated server and catering are available to rent for small parties as a special experience during evening events or as a private escape during the day. In addition, other areas of the arena including the front lobby, second floor, main hall – and the entire arena – are available for rent and accommodate any kind of celebration utilizing the flexible format of the space.

Epic Tournaments – As Allied Esports’ global flagship arena, players around the world will compete for the chance to play in Las Vegas against the world’s top competitors across multiple titles. In addition to players, the most renowned commentators and analysts bring the tournaments to life for those inside the arena and for viewers tuning in.
Daily Gaming – Las Vegas locals and visitors from around the globe will find a home at Esports Arena Las Vegas thanks to more than 100 gaming stations housing PCs and consoles. All-day gaming passes are $25 and local discounts are available.