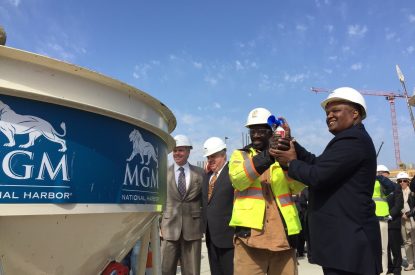 MGM National Harbor has celebrated the contributions of its construction company partners and workforce, all of which are working together to bring a world-class destination resort to Prince George’s County.

After receiving building permits just eight months ago, the project has hired the 1,000th member of its construction workforce, as it moves toward its opening in the second half of 2016.

“It’s amazing to think that this is the same piece of land I stood on less than three years ago – untouched but so full of potential for the residents of Prince George’s County and the State of Maryland,” said Murren. “While we still have hard work ahead, this is an achievement of which the people of Prince George’s County – many of whom are standing and working on site today – can be proud. Today we celebrate the dedicated men and women who turn vision into reality.”

Governor Larry Hogan spoke of the impact the MGM National Harbor project will have on the future of Maryland.

“This is a great day for Prince George’s County and the entire state of Maryland. Having grown up in this county, I know the positive effect this project is already having on the livelihoods of so many hardworking Marylanders,” said Governor Hogan. “The impact MGM National Harbor will have on our state and workforce will be tremendous, and not only for the 1,000 skilled construction workers we are celebrating today, but for the thousands of jobs that will be created once this magnificent building opens its doors next year.”

Creighton said, “The hiring of MGM National Harbor’s 1000th construction worker marks a significant milestone in a process that started at the ballot box in 2012. We are honored to have been chosen for this project and look forward to delivering a special destination of which the people of Prince George’s County and Maryland can be incredibly proud.

Since work on the site began last summer, more than 500,000 cubic yards of soil – enough to fill Ravens stadium – have been removed from the site and excavation is nearing completion. More than 6,000 foundation piles have been installed and the first of what will be hundreds of thousands of square feet of concrete is now being placed. The first “slab on grade” pour was made in February for the lowest level of the parking garage. By summer, the four cranes towering over the site will grow to 10, and the average daily number of workers on site will continue to grow from approximately 160 in January to more than 1,000″Currently the largest development project in the County, MGM National Harbor is creating thousands of good paying jobs and has made a commitment to hiring employees and contractors from Prince George’s,” said County Executive Rushern L. Baker, III. “I wish them continued success as they work to build a $1.2bn destination resort that will attract attention and visitors from around the world.”

While working hard on construction, MGM National Harbor is also hard at work fulfilling its commitment to utilize local and minority vendors on the project. Even though work is still ramping up, 62 local community Minority Business Enterprises (MBEs) certified by either the Maryland Department of Transportation or Prince George’s County are already engaged. These businesses include locally-based companies including Arel Architects, which was engaged to provide administrative management for the project team’s permit application processes.

“It’s humbling to reflect on the past year and all that’s been done to make this project a reality,” said Ronald Lipford, president and CEO of Arel Architects, Inc., a certified minority-owned business located in the Temple Hills community of Prince George’s County. “We were among the first Prince George’s County companies to partner with MGM on this monumental undertaking, and it’s exciting to see just how many more local and minority-owned businesses have been brought into the mix with many more to come.”

MGM National Harbor is a destination gaming resort project located in National Harbor, the waterfront development on the shores of the Potomac River in Prince George’s County, just south of Washington, D.C. near the Woodrow Wilson Bridge. In December 2013, MGM National Harbor was awarded a license to operate the sixth casino in the State of Maryland.