US – MGM takes slots to a new dimension with Sphinx 3D 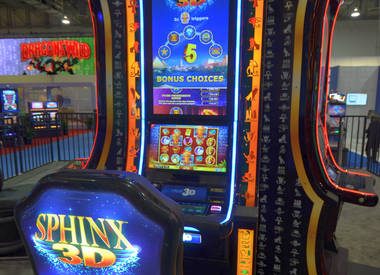 The first title in GTech’s new True 3D product line, which uses a glasses-free 3D display designed exclusively for the company by SeeFront, the Sphinx 3D game has already garnered multiple awards and accolades, and has been identified as the most highly anticipated premium game by a wide margin for three consecutive quarters in the Eilers – Fantini Quarterly Slot Survey.

The Sphinx 3D game uses a unique, patented autostereoscopic technology with integrated eye-tracking to make images jump off the screen or stretch into the distance in high resolution. The Sphinx 3D game runs on the new Axxis cabinet, which is designed to maximize player comfort, create a sense of personal space, and immerse the player in the game.

“Based on the responses from gaming operators and from players themselves, the Sphinx3D game is positive proof of GTech’s ability to successfully combine innovation and entertainment in the commercial casino segment,” said Victor Duarte, GTech Senior Vice President, Gaming and Content, and Sr. Vice President, North American Commercial Gaming. “As the game is rolled out to casinos across North America, we expect its performance to be driven by its unique and compelling features and functionalities.”

Following its award-winning global launch at the 2013 Global Gaming Expo, the Sphinx 3D game has been approved in several GLI jurisdictions, so more players will be able to experience this truly unique product in properties across the country and also across international markets as new installations take place regularly over the coming months.