US – New Jersey sportsbooks surge past $9m in August 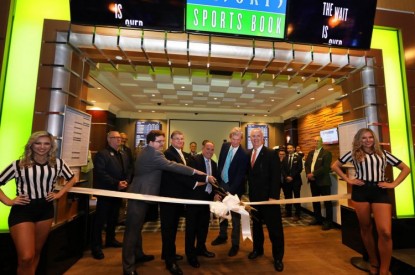 But August’s sports gambling totals foreshadow what is certain to be a paradigm-shifting September, according to analysts for PlayNJ.

“We could see sports betting grow by more than 300 per cent in September as NFL and college football ramp up and the number of options for online sports wagering in New Jersey continues to grow,” said Dustin Gouker, lead sports betting analyst for PlayNJ.com. “September will be an enormously important month for New Jersey’s legal sports betting industry.”

“Once mature, we expect New Jersey to be a much larger market than Nevada,” Gouker said. “We do not believe that it will take long before it is the largest legal sports betting market in the U.S. It could be within the coming year.”

For the month, online sportsbooks generated a handle of $21.7m in August, compared with $73.9m at land-based sportsbooks.

The August totals do not include the online launches of Fanduel Sportsbook, William Hill Sportsbook & Racebook, CaesarsCasino.com, and 888 Sport, all of which have launched since 1 September. And more are expected to come.

“We saw a race to the online market ahead of the NFL season, and the strong August handle shows why,” Gouker said. “Online sports betting will be an important vehicle for the industry. But September will give us our first full picture of just how strong the market for online betting truly is.”

Of the eight retail sportsbooks that have opened, FanDuel Sportsbook at The Meadowlands led the way by posting $3.1 million in August gross revenue. Gross revenue was up from $1.35 million in July. FanDuel was followed in gross revenue by:

In August, the state’s online casinos and sportsbooks generated $24.8m in gross revenue, down 4.2 per cent from the record $25.9m in July.

“Even with just a handful of operators in August, online sports betting added to the momentum that legal online gambling has maintained in New Jersey,” said Steve Ruddock, lead online gambling analyst for PlayNJ.com. “With many more online sportsbooks hitting the market in September, there is little doubt that August’s record will be short-lived.”\

With August’s collection of $4.3m in tax revenue, online casinos have now generated $159.7 million in total tax revenue for New Jersey since launch in November 2013.