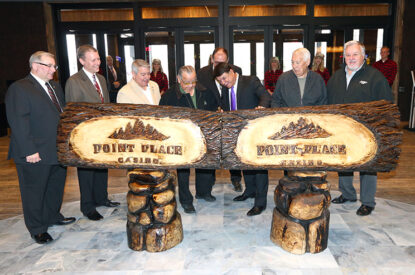 The Oneida Indian Nation has unveiled its all-new, 65,000-square-foot, smoke-free gaming facility Point Place Casino in Bridgeport in the Town of Sullivan in Madison County, New York, to a large crowd of excited guests.

Instead of the traditional ribbon cutting, officials took a saw to a ceremonial log to launch the opening day of Point Place Casino.

“Bridgeport has long embodied the culture of Oneida Lake and the many parks and camps, something people have been visiting for generations,” said Ed Allmann, Vice President of Enterprise Marketing and Sales. “So instead of a traditional ribbon cutting to mark this grand opening of Point Place Casino, we thought it was more fitting of our theme and in honor of our culture in this community to host a ceremonial log cutting.”

At the ceremony, Mr. Halbritter said: “This is a very exciting day for the Oneida Indian Nation, our employees, the Bridgeport community, and for the entire region. Point Place Casino will provide local residents and people throughout the region a new destination for food, entertainment and fun.”

Mr. Halbritter also noted how the facility is consistent with the Oneida Indian Nation’s legacy of facilitating projects that boost the local economy and created more than 200 permanent jobs and 250 local construction jobs.

“Through the work of our communities and collective investments, we have made Central New York the vibrant heartland of the region, and we look forward to continuing to build on that legacy at Point Place Casino.”

With lines beginning to form overnight, enthusiastic guests anxiously waited outside to be among the first to step into the pristine new facility when doors opened at 10:00 a.m. The excitement continued inside as inaugural visitors were treated to costumed entertainers, food and drink specials and the opportunity to win cash, Free Play, dining credits and more with the Lumber Jack-pot Prize Patrol, “Winning Waters” plinko game and more.

Grand opening festivities will continue throughout the weekend with additional food and drink specials, live entertainment every night at Paddle Bar and more.

Located at 450 Route 31 in Bridgeport, just a few hundred feet from the Cicero border, and named for the picturesque lake points surrounding it, the new smoke-free facility features a modern gaming floor with nearly 500 popular slot machines and 20 table games, including electronic Roulette and Big Six.

Known for its signature restaurants, the Oneida Indian Nation introduced several dining options at Point Place Casino, including Burgers of Madison County, Wicked Good Pizza and Opals Confectionary, as well as two unique bars – Fireside Lounge, which features a custom-made fireplace, the centerpiece of the venue, and The Paddle Bar, with both indoor and outdoor seating and live entertainment every weekend.