US – Paul Steelman’s Competition Interactive in the skill-based race 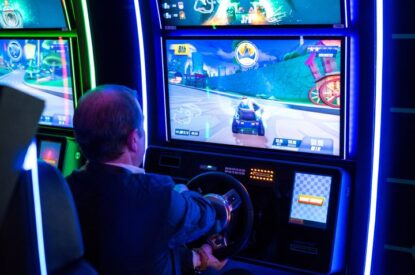 Competition Interactive is aiming to be a key player in the realm of skill based gaming at this year’s Global Gaming Expo, G2E, October 9-11, at the Sands Expo Center.

The gaming manufacturer and distributor is showcasing its expanded portfolio of Skill Based Games and Slot Machines with innovative Bonus Games, which are far different than any others in the casino industry.

Its premier game, Running Rich Racing, was just BMM test lab certified after a successful six month period at three prestigious Las Vegas casinos, including Planet Hollywood. The Competition Interactive team is excited to debut the reimagined Running Rich Racing-a multi-player kart-racing experience where players battle for cash on different race tracks based on modern spins of classic fairytales. The skill/chance hybrid game is now even more intuitive and fun to play and win, after the team listened to player feedback, during the time period, and incorporated recommendations to further enhance the player experience. The game’s innovative driving cabinet design features an attachable rear kiosk that houses the BMM certified game Running Rich REELS. An adaptation of the successful Running Rich Racing, “REELS” players spin a 5×3 reel matching power up symbols, characters and cars with exciting bonus games including a never before seen drag race.

The company’s newest products include the Star Striker series of games. Star Striker NEON is a fast paced, single-player, space shoot’em-up set deep in space. Players wager on various levels in 4 different stages, battling enemy alien ships and clearing a level for a Payday bonus. Through the use of wagered power ups, like multi-shot and shield, the player fights through to The Boss for the ultimate Payday. As the grandchild of the classic arcade game Galaga, Star Striker NEON is played on a standup casino cabinet with classic arcade buttons and a joystick.

Set in the same, universe, Star Striker RACING is the future of casino/arcade multi-player racing games. Players must try to complete 1 lap around Titan in the year 2040, racing against all vehicles and other casino players as they hit boost pads, avoid obstacles and collect Boost Orbs for added speed and added payback multipliers.

Competition Interactive is the innovative marketing leader in skill based gaming. The games are social, competitive, skill-based, fun, and the remarkable game design and art, created by Inviro Studios, is of AAA studio quality. Headquartered in Steelman Partners offices in Las Vegas, the gaming company was born from the love of video game technology and the passion of evolving the casino gaming experience. With leading gaming architect and innovator Paul Steelman at the helm along with Keith Winters, a veteran of digital media and animation, and Roger Hawkins, a 20 year veteran of the casino industry, the team is comprised of gamers, designers, artists, developers, engineers, and entrepreneurs. Together this finely tuned group is breaking new ground by bringing art and science into the world of casino gaming.

“This industry began here on the desert sands of Las Vegas and then became successful all over the world due to constantly creating new and memorable entertainment experiences,” said Paul Steelman, CEO of Competition Interactive. “I founded Competition Interactive to create new casino games that will revolutionize the casino floor by creating environments for skill based games where competition is not only between the player and the house.”

“We are bringing the ARCADE to the gaming floor,” said Keith Winters, Chief Creative Executive at Competition Interactive. “Every time you enter these distinctive spaces and start playing Running Rich Racing and the Star Striker games, it will be a new & unique experience that players and spectators can enjoy. Players can win these races based on skill and they can win based on chance, which allows anyone to be able to play and win.”