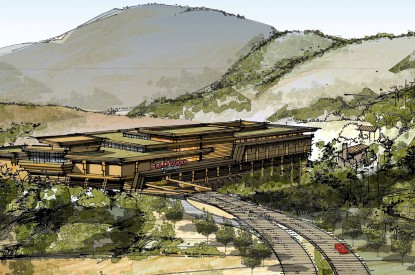 Jamul Indian Village of California (JIV) and a wholly owned subsidiary of Penn National Gaming, have started construction activities at the site of the proposed $360m Hollywood Casino Jamul on JIV’s reservation in Jamul, California, approximately 20 miles east of downtown San Diego, off of State Route 94.

Hollywood Casino Jamul, projected to open in late 2015, is expected to include a three-story gaming and entertainment facility of approximately 200,000 square feet, featuring over 1,700 slot machines, 50 live table games including poker, multiple restaurants, bars and lounges and an enclosed below grade parking structure with over 1,900 spaces. The project will create an estimated 2,500 construction and permanent jobs in the area. JIV has completed a comprehensive and rigorous environmental review as required by the JIV’s 1999 Gaming Compact with the State of California. JIV has made significant changes to the design of the facility to incorporate local community input, including significantly reducing its height and footprint. In addition, the planned development will now include water and wastewater reclamation facilities, addressing on-site fire protection measures. Visually, the facility will feature an earth tone color palette and downcast lighting to integrate with and complement the surrounding area.

“We are very excited that our long-time dream will finally become a reality,” said Raymond Hunter, Chairman of the Jamul Indian Village of California. “We have worked tirelessly for well over a decade listening to the voices of the community, addressing concerns, and ultimately developing a project that blends seamlessly into the region, while creating approximately 2,500 much needed construction and permanent jobs in our region. We look forward to continuing to be a good neighbor, as well as becoming a philanthropic leader and an active business partner in San Diego County. We are grateful for the constructive meetings and dialogue with the Governor’s office, California Department of Transportation, California Department of Fish and Wildlife, and many others who participated in this process.”

The commencement of construction related activities follows the recent review and approval by the California Department of Transportation of the project’s Transportation Management Plan (TMP) and issuance of an Encroachment Permit to the Tribe to minimize any traffic impact on SR-94 during the building phase of the project. The TMP includes flagging operations, state-of-the-art dirt and dust control measures, CHP patrolling of the impacted area and more.

“We have worked with Caltrans to develop TMP procedures that will keep construction traffic moving in a safe and convenient manner,” said Chairman Hunter. “Rather than using existing access roads for our hauling operations that require no encroachment of public right of ways, we specifically planned for our hauling operations to travel to the southeast and away from the businesses and neighbourhoods in Jamul to minimize any potential impact on the community.”

“We are excited to serve as the JIV’s developer, lender and manager of this Hollywood-branded gaming facility, which will deliver economic benefits for the Tribe and the local community,” said Jay Snowden, Chief Operating Officer for Penn National Gaming. “Jamul Indian Village of California has been working on this casino development for nearly fifteen years, and we’re proud to be a partner with them on a project that allows them to bring to fruition their vision to revitalize their reservation and become self-sufficient, while simultaneously sharing gaming revenue with local governments and charities. Along with JIV, we have made substantial progress with respect to the National Indian Gaming Commission’s process for approval of Penn National’s role as manager.”

The Tribe continues its commitment to working with all public agencies to minimise any off-reservation impacts related to the facility. The SR-94 Project Development Process, currently underway, will determine, consistent with Caltrans standard policies and environmental review process, a safe, convenient and cost effective means of improving the highway to accommodate traffic during the operation of the gaming project. The Project Development Process and critical SR-94 road improvements are expected to be finished in conjunction with the scheduled completion of the casino’s construction.