US – Pennsylvania could give green light to online gaming by March Despite a hearing in front of the House Gaming Oversight Committee being cancelled, momentum continues to build for a Pennsylvania online gaming industry with some analysts believing legislation is just months away.

The Keystone State is looking at allowing its 12 land-based casino operators to offer some of their games over the internet. Proposals include a $10m licensing fee and tax rates of between 15 and 25 per cent. It would legalise daily fantasy sports, skill-based slot machines, multi-state progressive slot machines and tablet gaming at some airports.

The state is planning to hold a joint gambling reform hearing in front of both the House and Senate allowing both legislative bodies, which have been at loggerheads over the proposals, to iron out any remaining concerns.

Pennsylvania Governor Tom Wolf highlighted the optimism that online gaming will be introduced by including online gaming revenue in his 2017 to 2018 budget.

He believes the expansion could generate as much as US$100m in the current fiscal year, increasing to $150m for the budget year.

His report said: “Given developments within the legislature, the governor’s proposed budget does not put forth a specific proposal for expansion, but merely assumes revenues within the current ideas being discussed.”

Pennsylvania’s casinos generated a record $3.2bn last year representing a 1.25 per cent increase year-on-year and cementing its position as the second top earning casino state after Nevada.
Senator Jay Costa believes online gaming is the natural evolution for gaming in the state.
He said: “I think it’s a natural progression of gaming in Pennsylvania, the next logical step. To some degree, both (iGaming and DFS) are already present, particularly fantasy sports. What we’re doing is regulating it. I think the people of Pennsylvania believe this is something that’s appropriate right now.”

Penn National’s Senior Vice President of public affairs D. Eric Schippers, one of the state’s 12 casino operators, said: “The commonwealth is now looking at close to a $3bn deficit, and all new revenue options are on the table. And so we’re trying to look at it as we’re concerned with extending our existing investment — the 2,300 jobs we have at our Hollywood Casino — as well as look at it opportunistically to see whether we can get iGaming out of this.”

Mario Scavello, Chairman of the Senate Community, Economic and Recreational Development Committee in Pennsylvania, believes online gambling could still be legalised by March of this year.

He said: “Sometime in March, we’ll have something done and passed in the House and Senate.”

The bill also seeks to fix the local share tax for host and surrounding communities by bringing in an annual slot license fee on Category 1 and 2 casinos. This plan was first proposed by the Senate in 2016 with the fee equating to 20 per cent of a casino operator’s initial slot license fee.

Republican Rosita Youngblood said recently: “I have been involved in this issue since 2010. And over the last two years, the House, in a strong bipartisan manner, focused heavily on gaining as much information and facts on the pros and cons of iGaming as possible. And that research showed that regulating iGaming would have no ill-effect on casinos, but in fact would enhance their operations.” 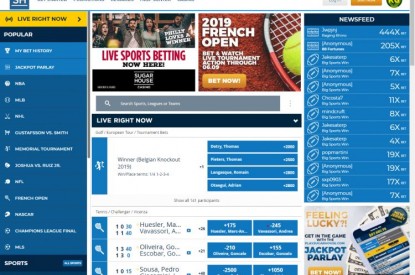 US – Sugarhouse’s Sportsbook off to a flyer