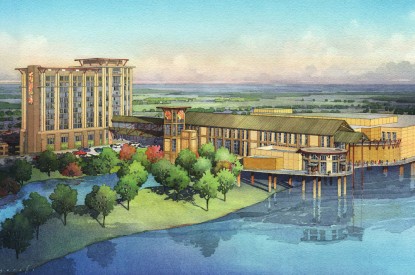 Pinnacle Entertainment is postponing the planned August 29 opening of its new US$368m casino in Baton Rouge, Louisiana, because state personnel needed to give final approval are caught up in dealing with Tropical Storm Isaac.

Anthony Sanfilippo, president and CEO of Las Vegas-based Pinnacle, said: “We remain at the ready to open L’Auberge when it is clear Tropical Storm Isaac is no longer a threat and pending this one final regulatory approval. We understand the primary focus of Louisiana State Police right now is making sure the citizens of Louisiana are out of harm’s way.”

The 74,000 sq. ft.one-level casino will house 1,500 slot machines as well as live table games. Governors in Louisiana, Florida and Mississippi have called a state of emergency as Tropical Storm Isaac approaches. The storm has forced at least six casinos in Louisiana, as well as four in the New Orleans area, one in Baton Rouge and one in Morgan City.